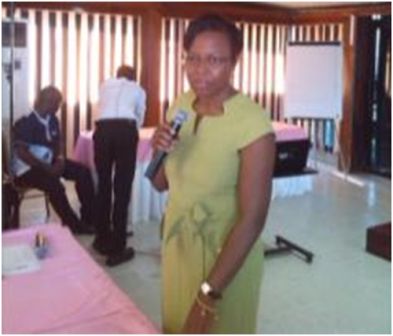 IFC, a member of the World Bank Group, today delivered hygiene and educational materials to ten Small and Medium Enterprises through the West African Venture Fund as part of the partners’ wider efforts to help Sierra Leone’s private sector combat the health and financial risks posed by the Ebola outbreak.    Mary Agboli, IFC Boss in Salone

The materials were made available through IFC’s Conflict Affected States in Africa Initiative (CASA) and consist of Veronica Buckets, soap, boxes of bleach, medical thermometers, and educational posters, all to help control the spread of the Ebola, which has killed about 1, 230 people in Sierra Leone and taken a toll on its economy.

West African Venture Fund’s representative, Amara Gegbai, said, “This contribution from IFC will help ensure that our clients’ business activity can carry on as safely and normally as possible. We support a lot of smaller businesses across Sierra Leone with loans and training and their continued operations are vital to the overall health of Sierra Leone’s economy, especially in this challenging time.”

IFC’s Resident Representative for Sierra Leone, Mary Agboli, said, “As a long-standing partner with the West African Venture Fund, IFC is committed to helping Sierra Leone’s private sector thrive, even as Ebola slows business activity and trade. This contribution is a small part of a much wider effort involving many institutions designed to stop Ebola’s spread and allow normal social and business activity to continue in Sierra Leone and the region as quickly as possible.”

IFC has a strong partnership with West African Venture Fund and has helped the institution increase its support for smaller businesses and expand financial services to underserved parts of Sierra Leone.

To help businesses in the wider region, IFC previously announced a support package consisting of at least $450 million in commercial financing that will enable trade, investment, and employment in Guinea, Liberia and Sierra Leone. The private sector initiative will include $250 million in rapid response projects, and at least $200 million in investment projects planned to support post-Ebola epidemic economic recovery.

IFC’s CASA supports private sector development in nine countries recovering from conflict, helping them attract investment and build strong private sectors as a foundation for growth and stability. CASA is supported by donor partners Ireland, the Netherlands, and Norway. IFC, a member of the World Bank Group, is the largest global development institution focused exclusively on the private sector. Working with private enterprises in about 100 countries, we use our capital, expertise, and influence to help eliminate extreme poverty and boost shared prosperity. In FY14, we provided more than $22 billion in financing to improve lives in developing countries and tackle the most urgent challenges of development.