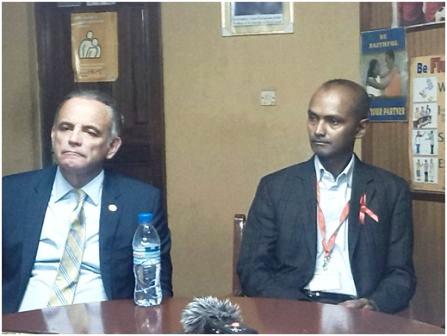 The United Nations Theme group on HIV and AIDS, UNAIDS, has fielded a mission to Sierra Leone comprising the Deputy Executive Director, Luiz Antonio Mateus Loures and the UNAIDS West and Central Africa Regional Adviser for Community Mobilization and Networking, Dr. Joy Backory. The three days visit (10th to 12th November 2014) was to convey UNAIDS solidarity with the Government of Sierra Leone and people; support and standby the country level efforts of UNMEER and to discuss with partners the impact of the Ebola Viral Disease outbreak on the HIV and AIDS response for informed strategic support from UNAIDS.   Mr. Luiz Antonio Mateus Loures and Dr. Joy Backory

Whilst in Sierra Leone, the team met with President Dr. Ernest Bai Koroma and Heads of United Nations Agencies in Sierra Leone; and also visited several locations in the country to get firsthand information and hold bilateral discussions with development partners. The visit was climaxed with a meeting with the National AIDS Secretariat and key partners supporting the response.

Addressing journalists at the National AIDS Secretariat Conference Hall on Tuesday, the Deputy Executive Director revealed that they are in the country to see how the UN Agency can join the collaboration to fight against Ebola by using its experience gained in the past three decades in fighting against HIV and AIDS.

Luiz Antonio Mateus Loures pointed out that the response people used on HIV and AIDS can best suit the Ebola fight. “We share the concerns of H.E. the President and the Health Ministyry on the impacts HIV and AIDS has on Ebola. We believe that these are two problems in the country that requires one solution,” he said, and added that the Health and other Social Workers experience on HIV and AIDS response could be one of the solutions.

The community, he said should play a key role on the Ebola response. “We no that the is need for more treatment centers and facilities; but these cannot be effective without the community playing a key role to bring Ebola to an end,” says the Deputy Executive Director.

One of the strategies he suggested is change of attitude towards the Ebola viral disease. “We need to do all our best to keep the epidemic at the lowest ebb,” he said.

Mr. Loures dispels the notion of people preferring being infected with HIV than Ebola. He said there is no option; whether Ebola or HIV, there is the need to bring them down.

He commended Sierra Leone for having a very good record in stabilizing HIV and AIDS. He suggested that this experience should be used on Ebola response. The best treatment for Ebola, he said is to stop the transmission and then the social aspect of it will then follow.

“We know that HIV and AIDS and Ebola has the barrier of stigma and discrimination,” he noted, reiterating that he saw no need for other countries to discriminate Sierra Leone by stopping flights to come into the country. “The flights should come,” he said.

Mr. Loures called on the authorities and Sierra Leoneans to try as best as possible to bring down fear and stigma on Ebola by creating a situation wherein people are willing to come out when they are sick.

Sierra Leone has maintained an HIV prevalence rate of 1.5%. it can be recalled during the UNAIDS Executive Director’s visit to Sierra Leone, he tipped the country to be one of those that will fast achieve the Transmission from Mother To Child (TMTC) amongst other countries. Sierra Leone has recorded a scaling down of TMTCT from 4.9% to 3.2%. The latest succeess story is seen as a situation where in HIV and AIDS will soon be a thing of the past.

The Deputy Director of NAS, Abdulrahman Sesay said although the Ebola epidemic has become a burden to the nation, the World AIDS Day will be celebrated in low key. He pointed out that NAS will work with its partners to do community sensitization and would want to ensure that HIV and AIDS response in integrated into the Ebola response.