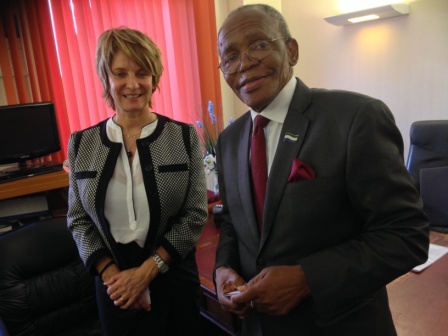 The Government of Norway will be sending 200 health personnels to Sierra Leone as part of the country’s contribution towards the fight against Ebola.

Norway’s Ambassador to United Kingdom Her Excellency Mona Jwl made the disclosure today Wednesday during a meeting with Sierra Leone’s High Commissioner to the United Kingdom His Excellency Edward Mohamed Turay at the latter’s office on Holborn, West Central London.

Ambassador Jwl said her Government is deeply concerned with the situation in Sierra Leone and has given it a priority to join the global fight to eradicate the Ebola disease from Sierra Leone.

Norway has already contributed funds as well as providing transportation and equipment to the fight against Ebola, she said.

The 200 workers will be deployed in a rotational scheme agreed with international health and development partners and the government of Sierra Leone.

According to the Norwegian Ambassador, the 200 health workers will be based in Moyamba where they will set up treatment centres and base camps for their staffs.

The Norwegian Ambassador praised the British government for their role in Sierra Leone through the Department For International Development (DFID).

The Sierra Leonean High Commissioner thanked and praised her Norwegian counterpart for what he described as ‘their tremendous and generous effort’ towards the people of Sierra Leone.

Turay said his office will offer visa gratis to the 200 workers to enable them travel immediately to Sierra Leone.

“You people will be remembered by the people of Sierra Leone as the true heroes for risking your lives to save our people,” the Sierra Leonean Ambassador said.

He expressed the need for more urgent action especially in the area of treatment beds which are desperately needed in Sierra Leone for the Ebola treatment.

The Sierra Leonean Ambassador said the team will find Moyamba as an interesting place with a people of warm hospitality.

Meanwhile, Turay’s High Commission in London will this month dispatch seven highly sophisticated ambulances it had acquired to be sent to Sierra Leone to help boost logistical problems towards the Ebola fight.