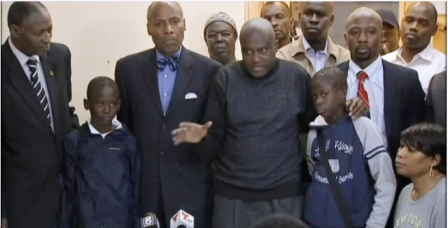 According to their father, students at I.S. 318 where they are attending school quickly began insulting the boys with the name “Ebola.”  After weeks of continued mockery, on October 24, a group of Amadou’s classmates started to hit and kicked him outside the schoolyard during lunch and when Pape came to his younger brother’s rescue, the students began to attack him as well.

“If they go to play in the gym, the kids tell them ‘Don’t touch the ball. If you touch the ball we will all get Ebola,’” adding that it wasn’t a fight, these boys were assaulted,” said Ousmane who immigrated to the United States 25 years ago.

Ousmane also called for a safety guaranty from school administrators and the police department that his sons will be physically and emotionally safe before they return to school.

A day after a coalition of community organizations including the Association of Senegalese in America, African Advisory Council, community leaders and New York State Senator Bill Perkins held a press conference to denounce the attack, New York city Mayor Bill de Blasio issued a statement following an enquiry for his reaction to the attack.

“We’ve obviously been focused on the core of our response. That has been job one, to make sure that everything we have to do to serve people is in place. And I am – I would say, before Thursday, Dr. Bassett had spent substantial time reaching out to members of the African immigrant community, as had a number of other officials of my administration. What happened to those two young men is unconscionable and unacceptable; we’ve made it very clear. We won’t tolerate any bullying, any stereotyping, and any stigmatizing. The school involved stepped in very aggressively, and I think has sent a clear message to that school community that this will not be accepted.”

Mayor de Blasio’ statement continued, “So, I mentioned separately, a few days ago, that some nurses from Bellevue had also suffered discrimination, because they were affiliated with Bellevue. I couldn’t think of anything more unfair than treating folks who are doing heroic work on our behalf with a sense of discrimination.”

“The message all over the city is the situation is under control. This is a very difficult disease to contract. Again, only through direct contact with the bodily fluids of an individual who has the disease – not airborne, not casual contact. People have to pay attention to those facts, show absolute respect for all New Yorkers, show respect for members of the African immigrant community in our city and I certainly will continue to get that message across, and I look forward to meeting with members of the community as well.”

But Mayor Bill de Blasio’s assertion that Ebola is not airborne seems to differ from the opinion of bio weapons expert Professor Francis A. Boyle, a professor at the University of Illinois, College of Law. Professor Doyle, a leading American expert in international law, responsible for drafting the biological weapons anti-terrorism act of 1989 and author of many books including bio warfare and terrorism said during a recent television interview on infowars.com that the Ebola virus “has been genetically modified to make it airborne to some extent.”

Though Senegal was one of five West African countries that had reported cases of the Ebola virus, the Center for Disease Control and Prevention together with the World Health Organization earlier in October officially declared the country “Ebola” free.

The attack has spurred New York City Public Advocate Letitia James to hold a meeting with leaders from African communities across the City to discuss how Ebola fear is affecting communities and ways to assist in a public education campaign to prevent further harassment and violence from happening.