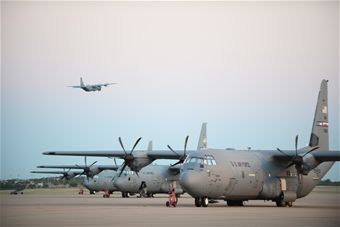 During their deployment, Dyess Airmen will be tasked with moving supplies, medical equipment and other materials as part of a comprehensive effort led by the U.S. Agency for International Development to respond and contain the outbreak of the Ebola virus in West Africa. Team Dyess Airmen and aircraft will eventually bed down in Dakar, Senegal, and will be joined by an additional 80 Airmen and two C- 130Js.

The deployment, which is expected to last approximately 120 days, will not require Dyess Airmen to treat or transport persons stricken with the Ebola virus, or healthcare workers who have had direct contact with Ebola patients. Instead, the mission requirements focus on moving cargo and needed supplies to support U.S. interagency partners in their collective response to the outbreak in West Africa.

“This deployment will focus on tactical airlift support and providing the items needed for Operation United Assistance,” said Col. Jeffrey Brown, 317th AG commander. “Examples of this would be moving materials needed for building hospitals or even the bare necessities a force of about 4,000 servicemembers would need during the course of a deployment in West Africa. With there being roughly 1,000 miles of coastline along Africa, having tactical airlift support is essential.”

Dyess Airmen deploying to West Africa are not expected to perform missions that put them at risk of contracting Ebola. However, there are protective measures in place before, during and after the deployment to safeguard Airmen from contracting an infectious disease.

As with any deployment, Airmen received immunizations and training on regionally-specific medical threats, including Ebola and malaria prevention and detection.

“The risk of these Airmen contracting Ebola is very small,” said Lt. Col. Jon Johnson, 7th Aerospace Medicine Squadron. “The virus also provides us with very clear signs that it is present before it really presents itself as a risk to be spread. So thankfully, in the remote event a person starts to show those signs, like an elevated temperature, we can isolate them from the rest of the group and prevent further spread of the disease.”

Prior to their departure, deployers, their family members and the base community also had the opportunity to participate in a pair of town hall meetings led by Air Mobility Command Surgeon, Brig. Gen. (Dr.) Kory Cornum, who addressed concerns about Dyess Airmen transiting through an Ebola outbreak area.

During their deployment, Airmen will be monitored daily by medical professionals and will have the resources and tools needed to keep the Ebola virus and other infectious diseases at bay.

When they return to Dyess, Airmen will continue to be screened twice daily for any signs of illness for 21 days. Members may receive additional medical monitoring based on a careful assessment of their activities during deployment.

“We really are confident with the steps we have taken and the procedures we have in place,” Brown said. “It’s really out of an abundance of caution that we asked all the ‘what if’ questions, and because we have asked those questions, we have answers if things don’t go as planned.

Initially, Jodi Smith was concerned by these “what ifs,” when she learned her husband would be participating in this deployment. As she received more information about the specific mission Dyess Airmen will perform and the measures in place both at home and overseas to protect the health and safety of her husband and other Airmen, her concern was eased.

“At the start I did have a little fear with this deployment,” said Smith. “But the amount of information I have been given by the group through the commander’s calls and through my husband’s leadership has been a great help to me to realize that risk is very small. Also, knowing that my husband is a part of something so important has us really excited that he can be a part of making a difference.”

Col. Michael Bob Starr, 7th Bomb Wing commander, also remarked on important role Dyess Airmen will perform while deployed, noting that the President of the United States considers containing the spread of Ebola to be a national security priority.

“We have a professional obligation to defend this country, and a personal obligation to defend our friends in Abilene and the Big Country,” said Col. Michael Bob Starr, 7th Bomb Wing commander. “When people hear about this deployment I don’t won’t them to be afraid – I would like them to be proud. We are very proud and committed to supporting this humanitarian mission.”