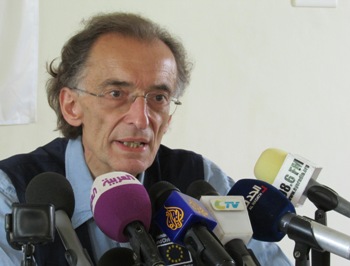 Speaking during a courtesy call on the Minister of Health and Sanitation at his Youyi Building office, Dr. Brouwer said the establishment of the National Ebola Response Centre by the President indicates seriousness in the fight to contain the Ebola outbreak in the country and commended the Presidency and the Health Ministry in their efforts to combat the disease.

He observed that the mobilization of resources for the Post Ebola phase should start now by building a guiding national response plan, adding that the EU is ready to address the priorities of the government and people of Sierra Leone.

Health and Sanitation Minister, Dr. Abu Bakarr Fofanah on behalf of the Ministry and government thanked the EU for their continued support to the government and people of Sierra Leone and reiterated his ministry’s commitment to work in concert with the newly established National Ebola Response Centre in meeting the challenges ahead.

He said as part of the fight to contain the outbreak there are short term priorities as well as post war interventions for additional support in the area of resource mobilization, infrastructure, more Holding and Treatment Centres, ambulances, Surveillance Officers and Contact Tracers, Laboratories, and Ebola Community Care Units in every chiefdoms.

The Minister told his audience that those that are not infected by the disease still remain the majority, adding that the establishment of Ebola Community Care Units would play a great role in breaking the transmission rate of the disease.

He said he is worried over the rebuilding of confidence on the population on maternal and child health, malaria, immunization and other illnesses, as people continue to refuse seeking medical attention in hospitals and peripheral health units.