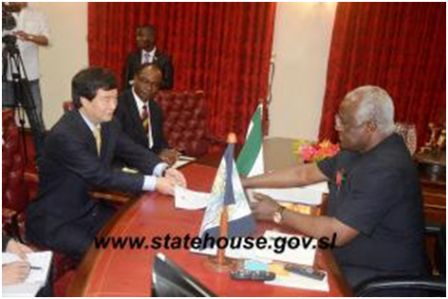 As international response to the on-going Ebola outbreak heightens, President Ernest Bai Koroma on Tuesday 28th October received at State House another set of donations from China to boost government’s efforts to stop the outbreak. The president expressed appreciation and commended the People’s Republic of China for their level of commitment towards halting the further spread of the dreadful disease in the country.

President Koroma described China as a special friend that has been supportive in many ways even prior to the Ebola outbreak in May this year. The president recalled that China was there to support the country with food items, equipment, personnel and laboratories, and with financial support to government, the African Union and the United Nations to help in the execution of the fight against Ebola. With further aid of Eighty-Two Million United States Dollars ($82m) to be shared among Guinea, Liberia and Sierra Leone, President Koroma described the intervention as commendable, and added that this will go a long way in further strengthening the bilateral relations between the two countries.

He expressed profound delight for the commencement of construction of a permanent lab to test for hemorrhagic fevers and noted that it will go a long way in transforming the Jui Hospital into a centre for disease control for tropical diseases in the sub-region. “I am very pleased with these interventions and also to let us know you are even putting in place a plan in the form of China-Africa Public Health plan to look into our capacity to be able to handle any future outbreaks.” The Chief executive implored all Sierra Leoneans to practicalize the knowledge gained through sensitization to speedily break the chain of transmission.

Chinese Ambassador to Sierra Leone Zhao Yanbo in further showcasing continued support to the country presented two cheques of Fifty Million Leones (Le 50,000,000) each to bolster the work of the National Ebola Response Center (NERC) in the fight against Ebola. He stated that the additional Eighty-Two Million United States Dollars ($82m) to the three most affected countries will go towards procuring hospital beds, ambulances, pick-up vans and personal protective gears and also strengthen the capacity of anti-Ebola and public health experts in case management, contact tracing and infection control. He informed the president that China is putting plans in place to build a center for disease control in handling tropical diseases in the sub-region and further organize the human resources.

It could be noted that China has been very supportive to government efforts in halting the spread of the virus in the country.

Meanwhile, the Managing Director of LEOCEM Arne Birger Johansen donated three thousand (3000) bags of cement to help in the ongoing quest to build more holding and treatment centers across the country. He added that they will continue to engage the private sector to scale up efforts and continue to sensitize their clientele.

The Concept Multi Media presented seventeen cartoons of personal protective equipment (PPEs) as their contribution to the fight against Ebola. The General Manager Miss Gertrude Meyer stated that as a result of the stigmatization surrounding the Ebola virus disease (EVD), they had come up with a campaign and a drama skit to reverse that negative trend and to prove to the world that not everybody is infected with the virus in Sierra Leone.