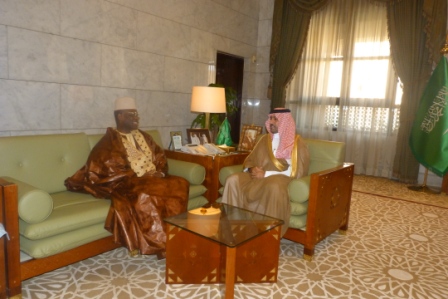 His Excellency, President Dr. Ernest Bai Koroma’s envoy to the Kingdom of Saudi Arabia has said that Sierra Leone attaches great importance to its brotherly and friendly ties with the Kingdom; as the two countries have enjoyed very close and long-standing relationship based on mutual trust and shared values.

H.E Ambassador Alhaji M.S. Kargbo made the remarks during a courtesy call on the Governor of Riyadh Region, His Royal Highness Prince Turki bin Abdullah bin Abdul Aziz at the Riyadh Governorate on Thursday, October 23, 2014.

During the meeting, they exchanged cordial talks and discussed issues of common interest between the two countries.  Among the discussions, were the desire of both countries to foster greater bilateral relations between the two sister countries and the eradication of the deadly Ebola virus in Sierra Leone and its immediate neighbours of Guinea and Liberia.

At the outset of the meeting, the Governor warmly welcomed the Ambassador and his team. He said Saudi Arabia was very much concerned about the Ebola outbreak and its consequences. “Our prayers and thoughts are with the people of Sierra Leone and other affected countries,” he said.

Earlier, Ambassador Kargbo said despite his short tenure in Saudi Arabia as the Sierra Leone envoy so far, he has witnessed the giant construction projects being launched in every region of the Kingdom, including the Riyadh Metro, which he said will bring about qualitative improvement in the city’s transport system. He hailed the Governor for championing the project which he said will also placed the Saudi capital on par with the world’s modern cities in advanced countries whose railway projects have played a key role in industrialization and modernization.

He stated that these developmental strides are all indicative of how profoundly the Saudi King is concerned about the general welfare of his people. He attributed the Kingdom’s major unprecedented achievements in the areas of economic, social and education projects across the country to King Abdullah’s vision and wisdom. The Ambassador therefore, prayed for the King’s sound health and longevity.

The meeting was attended by a good number of top ranking officials attached to the Governor’s office. And the Ambassador was accompanied by the Head of Chancery, Umaru Dura and First Secretary, Salamu Korom and the Press Attaché.