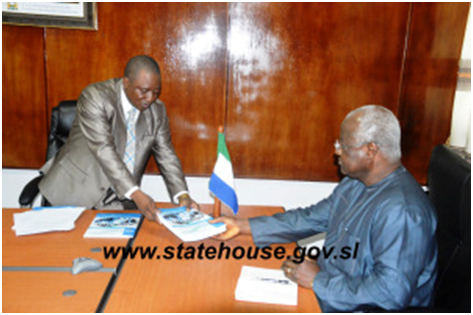 The Chairperson of the Human Rights Commission of Sierra Leone (HRCSL) Brima Abdulai Sheriff on Thursday 23rd October presented the annual report on the state of human rights in Sierra Leone to President Koroma at State House. This is the seventh annual report of the HRCSL and it is a report on the activities of the commission covering the period 1st January to 31st December, 2013. The report also includes the way in which the fundamental rights and freedoms contained in the 1991 constitution and international and regional agreements to which Sierra Leone is a party, has been observed or violated.

President Koroma pledged his commitment to continue supporting the activities of the commission and work collaboratively to address the issues and challenges raised by the commission, particularly on logistics and accommodation. He further assured the commission of government’s intervention to the Malen Landowners impasse, the dispensation of justice, social services, utility supply in the country, and noted that work on some of these issues was already in progress, and will further relate them to the relevant ministries so that they can react to the specifics that had been raised. “As we work collaboratively to support and make you comfortable, we will find a way of addressing the issues,” he said. In this regard, the president asked the Attorney General Mr. Frank Kargbo to follow up on the issues raised therein.

The Chairperson of the Human Rights Commission Mr. Brima Sheriff stated the commission has catalogued the activities in the protection and promotion of human rights in the country. While there are some improvement in certain areas, Mr. Sheriff said, there are also notable challenges affecting the full enjoyment of these rights. He also called on parliament to expedite the process of enacting the three gender bills and fully resource the National Commission for Persons with Disability to enable it function effectively.

As the commission recognizes government’s efforts in implementing some of the TRC and UPR recommendations, Mr. Sheriff further urged the government, parliament and the public to ensure that the Constitutional Review Process is transparent, participatory and inclusive in harnessing the views and opinions of the overwhelming majority of the people. 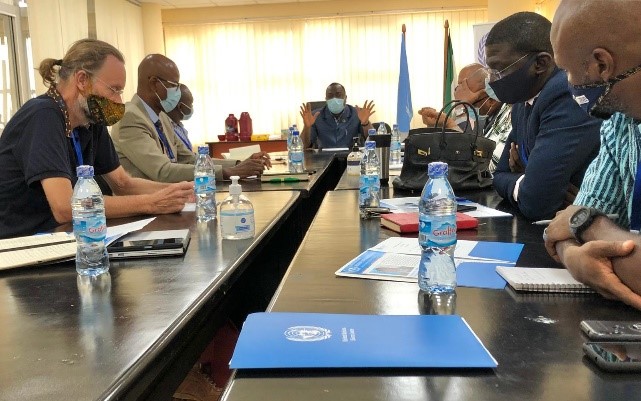