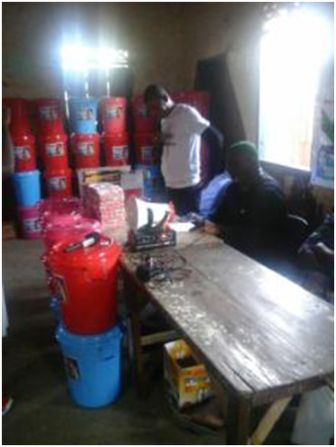 The Dandas Foundation that has for long being supporting schools and children with education materials ranging from bags, shoes and assorted text books in Freetown, Port Loko and Lunsar has again joined the fight against Ebola.

At a well attended meeting at the Kroo Jimmy Community School Grounds, Abel Dandas the father on the Chief Executive Officers of the Foundation donated 40 Veronica buckets, soap, Dettol to four vital groups in the Western Area and Northern Region that are closely topping the table as most infected regions.

Mr. Dandas stressed that the donation is to compliment government’s effort in the fight against Ebola. He appealed to everyone present to be ambassadors to help people understand and accept the reality of Ebola thereby reducing the denial and increase compliance to preventive procedures and protocol.

Mr. Dandas said until and unless every Sierra Leonean put aside politics and believe in the existence of Ebola, the fight cannot be successful.

The CEO of the Foundation, Lizidela Dandas who is presently in Europe lifting Sierra Leone high on the modeling through a phone expressed her heartfelt condolences to those that have already lost the lives of their families to Ebola and pledges her continued support to the affected families particularly children that are left as orphans.

She promised that through her father she will do her best in the Ebola fight.

The Chairman of Kroo Jimmy Best Group thanked the CEO of Dandas Foundation for such a wonderful venture and promised that the items donated will be use for their intended purpose. Gibril Bangua who represented the Old Murialdo Boys Association thanked the CEO for emulating the good will gesture of her late Grand Father Karin Dandas who for long has been kind hearted man within the Lunsar Community.

The program was climaxed with songs of praise for Adel Dandas for his relentless support to the community since his coming.