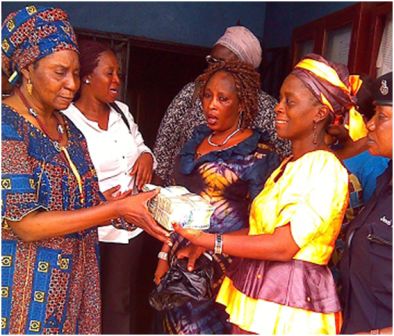 Madam Rugiatu Neneh Turay on behalf of the Amazonia Initiative Movement (AIM) and the German based PfeffeminzGreen Organization on 9th October 2014 handed over Le10 million to the women’s organization, 50/50 Group, to undertake sensitization on the Ebola outbreak. (Photo: Madam Neneh Turay handing over the money to the President of the 50-50 Group (L), Dr. Aisha Fofanah)

The ceremony took place at the YWCA Hall, Brookfields in Freetown.

The donation is part of the organization’s effort to contain the Ebola pandemic in Sierra Leone.

Rugiatu Neneh Turay informed members of the 50/50 Group that the PfeffeminzGreen organization, especially its leader, Stella Rothenberg who funded the AIM organization, contributed to the donation of the items and disclosed that it has done much to empower women’s organizations in the country, particularly the 50/50 Group that has been working hard over the years to ensure that women’s voices are heard, appealed to the Group not to relent and pledged her organization’s support to eradicate Ebola.

The 50-50 Group President, Dr. Isha Fofanah, who received the Le10 million on behalf of her organization, acclaimed Madam Rugiatu Neneh Turay and partners, with special reference to Madam Stella Rothenberg, for the laudable gesture and appealed to donors for more support to ensure that deprived communities and women are adequately catered for guaranteeing that the money would be judiciously utilized.

In a related development, the Member of Parliament for Constituency 57, Koya Chiefdom, Port Loko District, Hon. Abubakarr Koroma on Saturday 4th October 2014 heaped praises on the Amazonia Initiative Movement and PfeffeminzGreen Organization for donating bags of 50 kilogram rice and other assorted food items to his constituents.

According to Hon. Abubakarr Koroma, the donation is a demonstration of the organization’s concern for the disadvantaged, revealed that many people have died of the virus in the District, that his constituents are vulnerable to the virus and admonished all to be aware of the pandemic and abide by the preventive measures outlined by the Ministry of Health and Sanitation.

He further appealed to the organization to continue its support, particularly provision of food and medicines lamenting that the District has been isolated due to the increase in Ebola cases and commended Madam Rugiatu Neneh Turay for the laudable gesture which she assured would reach the beneficiaries.

Presenting the food and assorted items to the MP, the AIM Coordinator, Ruiatu Neneh Turay underscored that the donation is part of her organization’s support to complement Government`s strides to contain the outbreak and step-up their intervention from social mobilization and sensitization to responding to the needs of affected families and quarantined homes in Port Loko District.

She said the PfeffeminzGreen Organization provided the funds for the donation adding that they have already undertaken Ebola sensitization campaigns in different parts of the country and reaffirmed her organization’s commitment to complement Government’s efforts to eliminate the deadly Ebola disease in the country.