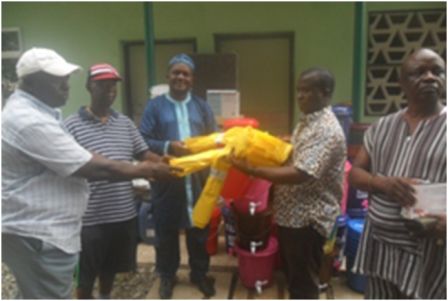 Lunsar, Sept. 3 (SLENA) – As President Ernest Bai Koroma continues the clarion call for collaborative efforts in the fight against Ebola, his government has provided a consignment of Ebola Response Materials estimated at millions of Leones to the St John of God Catholic Hospital otherwise known as the Mabessaneh Hospital of Lunsar. (Photo: PC Koblo Queen handing over medical kits to staff of Mabessaneh)

The consignment which included mattresses, Veronica buckets, chlorines and Personal Protection equipment, coincided with another package of boots, masks and screens that were presented by Madam Isha Daramy Kabia on behalf of the Friends of Maternity Hospitals, an organisation she serves as Director.

These items were formally handed over to the Management of the Hospital by Paramount Chief Bai Koblo Queen at a brief ceremony that was attended by a cross section of traditional authorities, staff and workers of the hospital.

Paul Santigie Sesay is the Coordinator of the Marampa Chiefdom Health Committee and one of those that formed part of the traditional authorities’ team at this presentation ceremony. He said the essence was to help the Hospital become much more efficient in handling Ebola related cases and urged for the items to be used for the intended purpose.

He was buttressed by Paramount Chief Koblo Queen who used the opportunity to apologise to the Brothers of the St. John of God Catholic Hospital for what was referred to as the inconceivable manner in which the Mabessaneh Hospital was quarantined. The apology was accepted in good faith by Bro. Dr. Manuel Garcia Viejo on behalf of his colleagues. He however stressed the need for an improved communication measures in the light of a cordial working relation between the Mission, the community and government.

Dr. Jibao D Sandy, the Medical Director at the St John of God Hospital the decision to have quarantined them remained unjustified as there has never been any Laboratory Confirmed Case of Ebola in their Institution. He explained how all the purported cases that were subsequently referred to the Kenema Treatment Centre were diagnosed, certified and discharged as Ebola negative without any form of treatment.

As the war on Ebola intensifies DC... 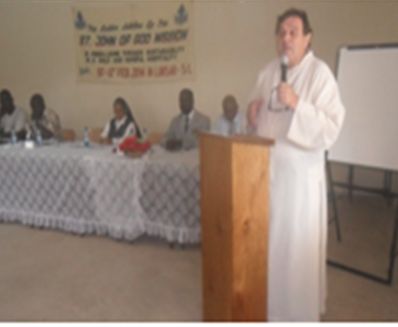 Conference participants map out the futu...