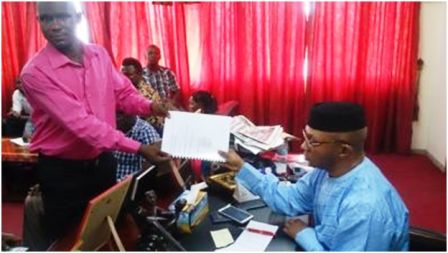 The All Political Parties Students Association (APPSA) on Friday 29th August 2013 adhered to the clarion call made by His Excellency President Dr. Ernest Bai Koroma for all Sierra Leoneans to join the national fight against the Ebola Virus Disease (EVD) in the country. A representation of the Association on Friday presented a project proposal to the Minister of Political and Public Affairs, Hon. Alhaji Kemoh Sesay on the fight against the deadly virus in Sierra Leone.

Giving an overview of the project, the Association’s Secretary-General, Dwight Z. K. Sheriff, who doubles as National President of the Sierra Leone Peoples Party Students Association said if there is any other group that is diversely affected and is currently suffering from the outbreak of Ebola in Sierra Leone, students are seen as the most affected.

He said as a result of the deadly outbreak in the country, all schools, colleges and other learning institutions have remain closed to date, adding that event pupils who were supposed to have written the Basic Education Certificate Examination (BECE) have been left behind compared to other West African countries writing the same exams together with Sierra Leone.

“The situation at hand presently is very much disturbing and has degraded the educational sector of the country” Dwight stated, while stressing the need for all Sierra Leoneans to complement government’s efforts to eradicate the virus in the country.

He used the forum as an opportunity to thanks the minister for creating the enabling environment for the Association’s membership to participate in the fight.

Dwight Z. K. Sheriff assured the minister that his entire membership has unanimously agreed to join President Koroma and his government to ensure that the deadly virus is kicked out of the country and never to return again. He said “We are ready to lay down our lives for the development of Sierra Leone just as President Koroma is ready to lay down his life for the development of young people in the country”.

Receiving the student’s delegation in his office, Minister Kemoh Sesay expressed thanks and appreciation to them for taking up the wise step to join the fight against Ebola in Sierra Leone. He said he was very pleased to see students coming together to form such a meaningful Association in a developing country like Sierra Leone. This the minister went on demonstrates the level of political tolerance the country is enjoying.

The Minister further expressed his joy to also see students sacrificing their lives towards a national health fight and prayed that with all these collective efforts, Sierra Leone will soon win the fight against Ebola.

He encouraged the students to continue uniting themselves not only for politic or the virus outbreak but also for national development, as they are the leaders of tomorrow. According to him, students have a very crucial role to play and responsibility to handle in the national development of any country.

The Minister noted that students can be better contact tracers, community surveillance officials and mobilization officials in the fight against Ebola, as according to him, they are well known and sometimes very much influential among their peers, especially when it comes to decision making. He said togetherness is very much important to the fight against the deadly virus in Sierra Leone, while noting the setbacks and hazards caused so far by the outbreak of the virus in Sierra Leone, especially in the educational sector.

Hon. Kemoh Sesay assured his guests of his continued support to their Association and also promised to discuss their project proposal with his boss, the President. He expressed confidence that President Koroma will put premium on the proposal, especially when it has to do with young people’s participation in the fight against Ebola in the country.

Permanent Secretary in the Ministry of Political and Public Affairs chaired the meeting.