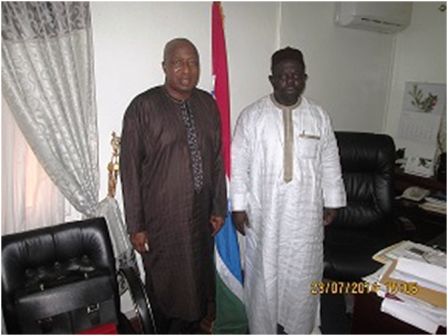 Sierra Leone’s Ambassador to The Gambia and Guinea Bissau, His Excellency Ambassador Soulayman Daramy, has in a show of diplomacy and professionalism, for which he is good at, called upon the Foreign Minister of The Gambia Hon. Aboubacarr Abdouliah Senghore to acquaint him and his government of the rapid developmental strives and economic growth Sierra Leone is going through and to further discuss on how to strengthen the bilateral ties existing between the two brotherly countries.

Speaking during a courtesy call at the office of the Foreign Minister on Wednesday, Ambassador Daramy said that both countries had come a long way in boasting the existing ties between the two countries. “I am here representing my President to see how much both countries can emancipate from our colonial weakness to development advancement through trade, culture and other related bilateral ties” he stressed.

He took time to brief the Minister of the rapid development the nation is going through the lead APC Government in the areas of trade, agriculture, roads infrastructure, energy, education and staying on top of the Ebola fever affecting the region.

“President Ernest Bai Koroma and his government attach so much importance and interest to the things that bind our two nations and has asked me in a special way to convey such to your people and President Yahya Jammeh” he said. Ambassador Daramy, added that he has never failed and do not intend to fail during his tenure of office in the Gambia but rather to leave a legacy for prosperity.

On the issue of Sierra Leoneans in The Gambia, Ambassador Soulayman Daramy noted that he was very pleased to hear it from no less a person than President Jammeh himself, that they are law abiding and they can stay as long as they wish.

Responding, Minister Senghore expressed his delight and that of government for the appointment of a seasoned Diplomat as Ambassador Daramy to The Gambia. “Had it being that both countries were neighbors as it is with Senegal we no doubt would have formed a Federation” he observed. This he said is as a result that Gambia has gained a lot from Sierra Leone especially in the area of education and extended family ties dating back to colonial days. He informed that President Jammeh has pledged his government’s continued support in all areas of cooperation at all times.

“Mr. Ambassador, my doors and that of the President are open to you at all times. Please convey to your President and people our warmest greetings and regards” he assured. 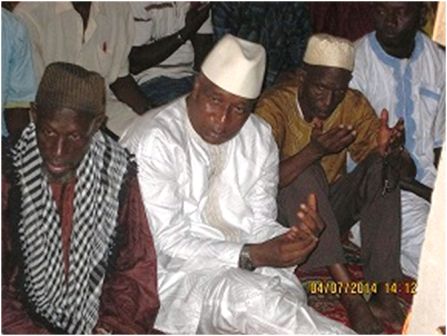