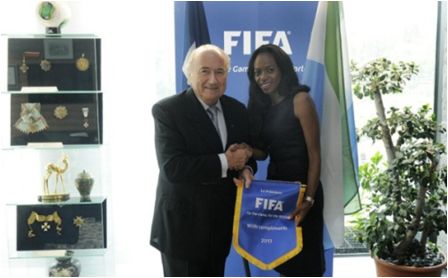 The Federation International de Football Association in a recent statement on FIFA.com has outrightly indicated that they will support Sierra Leone in relation with allegations that stunned Sierra Leoneans at home and abroad. (Photo: Against match Manipulation)

FIFA’s statement read, “FIFA will support Sierra Leone in the fight against match manipulation. The President of the Sierra Leone Football Association (SLFA), Isha Johansen visited the home of FIFA to meet with FIFA President Blatter, FIFA Secretary General Jerome Valcke and representatives from FIFA’s Security Division and Disciplinary & Governance Department to discuss and seek advice as to how to tackle the wave of match manipulation in two ways.

By supporting the investigation conducted by the SLFA and by assisting it in setting up its own national integrity programme, FIFA Security Director Ralf Mutschke will in due course personally travel to Sierra Leone to finalise the plans.

During the meetings, the FIFA President and the Secretary General again underlined the utmost importance of combating match manipulation and promised full support from FIFA.  “Match fixing shakes the very foundation of sport, namely fair play, respect and discipline.  That is why FIFA employs a zero-tolerance policy when it comes to any infringement of these values. We therefore fully support the SLFA”, said FIFA President Blatter.

However, many stakeholders are disgruntled and are still of the opinion that FIFA not comparatively dealing with the Sierra Leone football crisis, and many are patiently waiting to see how the matrimony between the Sports Ministry and Sport Minister Paul Kamara, SLFA President Isha Jonansen will end up.

FIFA’s President Blatter is popular and has overwhelming support from the rest of the world because he supports football FA’s and gets back their support.

A lot of the European FAs made it clear they didn’t support Blatter but I’m afraid from the rest of the world he has overwhelming support.