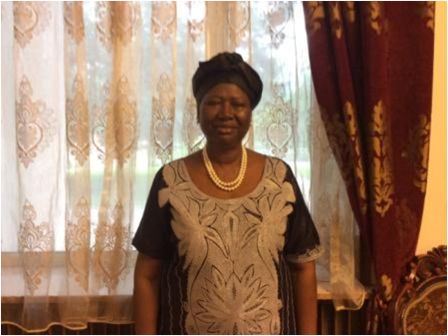 Sierra Leone’s Deputy Chief of Mission in the People’s Republic of China, Her Excellency Kumba Alice Momoh (in photo) has called on a cross section of students studying in the People’s Republic of China to give support to His Excellency President Dr. Ernest Bai Koroma by making whatever little contributions and efforts available to bring an end to fatal Ebola disease currently faced in Sierra Leone.

She made this clarion call on Friday, 4th July during a courtesy call on the Embassy by the Executive of the Sierra Leone Students Union in China.

Madam Momoh said, people should be seen united on a national issue like the current health challenge and encouraged all,saying, politics should be put aside and people united to bring an end to the scourge.  “In our little ways, we can pass the message to our relatives back home about the Ebola virus and help in the sensitization process”, she encouraged the students.

“We are all saddened and moved about the current Ebola crisis in our country. As stakeholders, this is the time we should support His Excellency the President, Dr. Ernest Bai Koroma by making our little contributions especially as students by talking to your relatives back home, about the Virus, so as to bring an end to it”

Speaking on relationship between the Embassy and Sierra Leoneans,  Madam Momoh said, “it is our policy, and particularly that of the Ambassador to work closely with Sierra Leoneans in a bid to ensure their welfare and concerns are given due consideration, as representatives of Government in the People’s Republic of China. We run an open door policy”

Union President, David Kanume Koroma congratulated Ambassador Momoh on her appointment. He also congratulated, through Deputy Envoy Momoh, Ambassador Foh on his  recent Presidential Award, the Commander of the Order of the Rokel Award, given him by His Excellency President Ernest Bai Koroma.

He expressed optimism, that with the arrival of Deputy Momoh, Sierra Leone will see great developmental returns from China  “as the Ambassador is a focused man and highly determined” to adequately represent his country in China and contribute to Sierra Leone’s development.

Koroma also informed the Deputy Ambassador that twenty-four (24) Sierra Leonean students have graduated this year from various Chinese Universities and are ready to return home and make their contribution to nation building. “Among these graduates are five (5) Doctoral graduates in various disciplines, seventeen (17) Masters Graduates, and two (2) undergraduates”

He extended the Student Body’s appreciation to the Embassy for its role over the years  towards student issues. He also used the meeting to, among other issues, asked for a possible harmonization of the lists of beneficiaries and non-beneficiary of the Sierra Leone Government Allowance for students in china.

In response Envoy Momoh promised to try to fully understand the background so as to enable her say something about student funding.

Present at the meeting was the First Secretary/Ag.HOC Augusta Akibo-Jones.Also present was Vice President of the Union, Salimatu Dumbuya, who touched on the issue of shipment of the belongings of the students who  recently graduated.