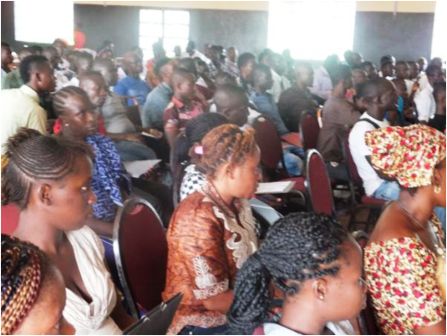 In a bid to transform Sierra Leoneans from a negative mindset to a positive mindset that will spur socio-economic development,  the Attitudinal & Behavioural Change (ABC) Secretariat has launched a youths Empowerment programme for one hundred and fifty youths at the Makeni Town Hall, Station Road, Makeni City, Northern Region, on 23rd  June, 2014. The project was launched to empower the talented youths of Makeni City, it  aim is to empower youths through training to showcase their talents through exhibition. The  youth project caters for one hundred and fifty youths from the thematic areas of the project; Music production, Drama/Filming production, Drawing/ Graphic Design (Functional Arts), Gara-Tie-Dyeing and Cultural performance with the objective of importing messages of positive attitude taught at the training . It is expected that community stakeholders in the location of the project will sponsor the finish products to enable the Secretariat use them in the propagation of its messages and campaigns.

The Chairman, Mr S.O.Z. Alghali ,who is also the Senior District Officer Northern Region in his opening remarks informed the youths that the training is very important  and timely.  According to him, the President have found out that the youths in Sierra Leone are very eager and lucrative but they only need some training so that their talents can be of benefit to them in the near future.  And to the Youths ,”much is given so much is expected, I want you to go and actualise the dream of the President, as he has donated his second term to you, so is time for you to put on the best seriousness you can for progress in this nation”.

The Executive Director ABC Dr. Ivan Ajibola Thomas in declaring the purpose and intent of the programme divided the youths program in to two segments:  training, and Exhibition.  According to him, the Secretariat has observed that after training, several youths do not manifest what they learn from those workshops so that is why the ABC decided to add exhibition to the program so that the youths can showcase their talents. He divided the Youths in to five groups; Gara-tie dyeing, Music, Cultural Performance, Graphic Design, and Drama/ Filming. The training aim to discuss issues affecting the growth and development for the youths.  He discussed the following  such as striving for success  which consist of hard work and labour, youths empowerment, positive attitude, focus on youths issues, Negative Attitudes of Youths and also the expected outcomes.

The AIG of Sierra Leone, Mr. Mustapha Kamara explained to the gathering what age bracket makes a person a youth, to him any person from the ages of 18-35 is a youth and stress that this group of people constitute a large number of our communities. It consists of Okada Riders, Pupils and Students and that  many chaos in our communities today are caused by youths sighting strike actions, Okada Sagas, Cliques ,but stressed that the Sierra Leone Police Force will ensure that this group is law abiding. The Police force is finding it difficult to deal with youths but we will do our best to put them under control. He inform them that ”if you want to develop your life, you have to recognise and respect another person’s right as this will add value to your life”. He also educated them that each and every one of them should have integrity and he told them that the formula for integrity is, accountability +Competency +ethics -Corruption = Integrity.

The Regional Coordinator, Youths Commission, Northern Region, Mr. Victor Sumu Fornah  inform the gathering that their mandate as a Commission is to look after young people and their activities. He express his appreciation to the ABC Secretariat for organising the youths empowerment training. According to Mr. Fornah, the concern of the commission was what will happen next to those trained youths? He appealed to the youths to treat the training with all level of seriousness because the expectation of their people is too much, that is the reason why several Organisations are targeting and sponsoring them. He also encouraged them to register all their groups with the Youth Commission and that those registered youth groups will always benefit when opportunities arise for youths.

The Senior Investigation Officer ACC, Mr. Joseph B. Noah informed the gathering that it was not a coincidence that the ABC & ACC signed a Memorandum of Understanding.  He opined that the  Secretariat and the Commission are fighting negative attitudes that has brought setback in this country. The ACC is fighting Corruption which is a negative attitude, the ABC is fighting negative attitudes and behaviours of people. The ABC is working relentlessly in preaching positive attitudes. In life ,he said ”I believe that when you make effort, you will always succeed. “Please do not be shy in showcasing your talents and make sure that you work very hard to add value to your life.” he stressed.

Several Eminent personalities delivered statements such as the representative of the Mayor, the Regional Coordinator ENCIS, the Assistant Director Ministry of Social Welfare Gender and Children’s Affairs, Chairman Contractors Union,  the President Station Clan,  and the Chairman Youth Groups.

The training was launched by the Vice Chancellor of UNIMAK Rev. Father Dr. Joe Turay. In his keynote address he told the gathering that youths play an integral role in society, and have the opportunity to grow as this same people will one day take the mantle of leadership at community and state levels. The eloquent speaker further stated that, for any organisation to create the maximum impact expected that organisation should first of all recognise and prepare the youths for the future through empowerment.  He denounced  the aspersion of some people that  youths are not important and does not matter in society. He clearly stated that his conviction is that no community will succeed or stand the test of times without including the youths in their activities as they are the largest group and the engine of the Country.

The technical session started with the lectures of the National Coordinator ABC Secretariat, Madam Nanette Thomas who lectured on the topic ”The Importance of Youths Empowerment and Positive Attitude” she noted that empowerment means to give the power of authority to take control over one’s life or situation over something, whilst positive attitude is the power that drives everyone to success. Developing and manifesting positive attitudes makes life happier.  She also stressed that the powers of positive attitude allows you to adapt, change and also evolve. ”With a positive attitude, you can enjoy your school work, artistic work, and realise your  personal and relationship goals” she stressed.

The Lecturer of Mass Communications UNIMAK, Mr. Emmanuel Turay in his presentation lectured on the topic ”Finding your Niche in the performing Arts: How to identify and develop your talents”. During his lectures Mr. Turay defined Performing Arts according to him, as an art in which the artists uses his body, voice or object to convey artistic expressions.  He told the participants that any artistic performance without body movement is not an artistic work and that even in drawing, part of your body moves same goes for all other works. He also mention that in Sierra Leone, artists have already lost their traditional dancing style and have adopted a modernise way of dancing.  And that before this time, there were traditional instrument used in music which attracted listeners to start dancing for instance the ”Kelleh” and other local instrument. He also mentioned the three revolutionary tools in discovering and developing  talents: you should be able to understand your talents; that is you should distinguish your natural talents from things you can learn, should know common languages to describe your talents, to develop your natural talents, requires knowledge and skills. He stressed that for one to develop talents, you can’t do it in any unserious way, it requires effort which is very similar to learning how to read and write. He therefore encouraged the participants that they should have confidence in themselves and should  be able to add more value  to what they are doing.  and effort.

The Program Manager MBA UNIMAK Mr. Peter Lansana presented on the topic” Leadership Budget Management and Project Proposal” in his lectures, he informed the participants about the steps involved in writing a project proposal.  One should write the summary of the project, country information, project context, problem statement, target group profile, output and activities. under the project proposal the following should be considered; title of the project, project duration, country/region, participant/target group, output activities and total budget and financial analysis. With the project context; the Geographical & physical environment, demographic, social/cultural, Economic and Ecological should be clearly started. He also explained to the participants the various phases of a project. He stressed to the participant that for a project to be successful and to last longer, the finances has to be properly managed and controlled.

ACC vows to empower every chiefdom...

An Islamic Ruling on Thalaaq and K...