ACC vows to empower every chiefdom to fight corruption 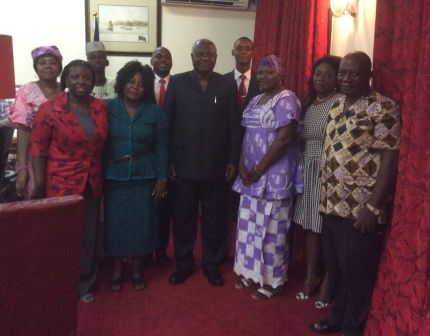 ACC vows to empower every chiefdom to fight corruption

The Anti-Corruption Commission has vowed to empower every community in the southern region to fight corruption as it embarks on a drive to increase community involvement in the fight against corruption.  (Photo: ACC team with committee members)

This commitment was made to the people of Fakunya Chiefdom by Mr. Samuel Marah, Regional Manager of the Anti-Corruption Commission at Ngandorhun Court Barry on the 1st July 2014. The meeting was organized by the ACC for the formation of Chiefdom Network Committee. The Chiefdom Network Committee is a mechanism by the Commission to enhance the participation of local communities in fighting corruption. The said committee will complement the work of the ACC in areas such as sensitization, information gathering and monitoring the implementation of the National Anti- Corruption Strategy. The meeting attracted over seventy people including the Paramount Chief, other local authorities, farmer’s association, women’s group, teachers, civil society representatives and other community stakeholders.

In his remarks the Acting Paramount Chief for Fakunya Chiefdom PC Alhaji Francis Gibrilla Robert thanked the team from ACC for such an admirable initiative which he said is a manifestation that the ACC is on the right footing.  He gave assurances that the Chiefdom will collaborate with the Commission and lamented that the sensitization conducted about the evils of corruption and how to fight is very useful to the people of the Chiefdom.

P.C. Robert warned those that would be nominated to be beyond reproach by not  condoning or involving in corruption in the Chiefdom, noting that failure to divulge corrupt practices to the commission would  undermine development in the Chiefdom for the benefit of the people and generation yet unborn.

The Paramount Chief highlighted instances where contractors, traditional leaders, non- governmental organizations, and nurses had exhibited corrupt tendencies and however expressed optimism that with the establishment of the committee their activities would be monitored sufficiently.

Pointing out the purpose of the meeting the Public education Officer of the Bo Regional Office Umar Sesay said it was geared towards collaboration in tackling corruption at chiefdom level. He noted that corruption is a scourge that is affecting the country and called on the people to vociferously speak up against it.

Umar Sesay explained the three main approaches employ by the Commission to fight corruption which are sensitization, prevention through the review of system and processes of government institutions and  investigation and prosecution, and clued the people on progress being made by ACC in the execution of it mandate.

The Senior Public Education Officer gave an historical background of the ACC and it mandate, defined corruption and it effects. He recalled that the past rebel war was chiefly attributed to corruption which was institutionalized in the country and he therefore encouraged them to put all hands on deck to speak up against corruption as it is disease that would eat into the facet of the society.

The Public Education Officer also of the Bo Regional Office Wilfred Bangura said corruption create the floodgate for the wastage of government and donor funds and emphasized the need for  transparency and accountability to be enhanced in the chiefdom particularly in the health sector.

The Chiefdom Network Committee was nominated comprising five members who will be given the adequate training on how to execute their duties in accordance with the stated procedure of the commission.

The Vote of thanks was moved by Jariatu Bengeh who expressed happiness about the laudable initiative as the chiefdom people have now been placed in the vantage posture to monitor and report cases of corruption. She called on the commission to strengthen the committee to do their work effectively and efficiently as pursuing the path of truth is not devoid of cultivating enemies.