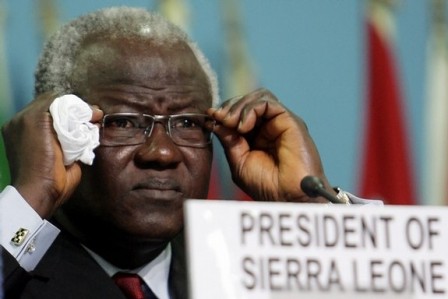 Now that many of President Koroma’s most trusted ministers and heads of parastatals continue to disappoint him, who else will the president trust? Who else is honest enough to win the confidence of His Excellency? Little wonder many key vacant positions remain unoccupied.

It appears that, the president is still spending sleepless nights puzzling over who to appoint to those positions without regretting it at the end. And these are very sensitive offices crucial to the development or demise of this country, therefore, such offices should be controlled by God-fearing and patriotic people. But it seems difficult for the president to determine those honest and patriotic enough to handle those vacant offices from which he has fired his most trusted people.

The president may be still bearing the shock he incurred from the deceptive behavior of his sacked Minister of Works, Alimamy Petito Koroma and his recently dismissed Energy Minister, Robin Coker, his deputy, Bash Kamara and some professional heads. How can the president easily believe any other Sierra Leonean after being let down by people like, Mamoud Tarawalie, the sacked minister who sacrificed his ministerial job on the altar of sex.

The likes of the ex-Health Minister, Sheku Koroma (the first sacked by the president), Edmond Koroma of NASSIT, Munda Rogers of the Sierra Leone Roads Authority (SLRA) are all a very big disappointment to President Koroma and this republic.

But what beat my imagination is the sad fact as the president keeps sacking his ministers for corruption, so the vice continues unabated. Making matters worse is the fact that many public officials who chop huge sums of state money end up being fined pittances and we see some parading the streets boastfully in expensive flashy vehicles. Just like the former Mayor, Herbert George Williams, who swindled billions of Leones from the state coffers was penalized with pittance over which he publicly rejoiced.

President Koroma may have genuine plans to bring prosperity to this nation but he is unfortunate to find himself working with the wrong people whose sole aim is to fatten their pockets at the expense of the masses. So, the president must stand firm if he wants to realize his dream of prosperity for this impoverished nation.

I pity Pa Ernest Koroma because I know what it means to be a victim of disappointments from especially those you trust.