In Sierra Leone, as more Ebola Cases are confirmed, mixed messages and alarmist media reportage tend to derail the efforts of health officials to contain the virus 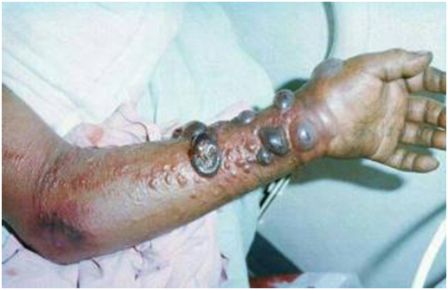 In Sierra Leone, as more Ebola Cases are confirmed, mixed messages and alarmist media reportage tend to derail the efforts of health officials to contain the virus

Ebola was first reported in Guinea in March 2014 in four southeastern districts: Guekedou, Macenta, Nzerekore and Kissidougou. By Mar. 27, four confirmed cases were found in Conakry, the capital of Guinea. Since then, the virus has crossed borders to Liberia causing distress and panic among the populations and the authorities alike. Sierra Leone which is practically sandwiched between Guinea and Liberia was officially free from the disease albeit some reports of a dead victim of the virus being buried in Kono east of the country.

Reports say, for the past several months, the Ministry of Health has trained over 360 health workers on Ebola case management. Ebola sensitization materials have been distributed across this country while radio and TV sensitisation continued with jingles on prevention messages in all local languages especially in community radios. Bulk SMS broadcasts and interest groups such as, market women, motor bike riders, traders union, religious leaders, tribal authorities, the media and civil society organizatios have all been involved in the campaign against Ebola. PCR equipment that test specifically for Ebola and 5000 Personal Protective Equipment procured, special ambulances assigned to transport samples and suspects, isolation units set up here and there.

Yet on May 25, 2014 the sad news came as a rude awakening for the health authorities and the people of Sierra Leone, Ebola had struck in the very place everyone had been looking; Koindi, Kissy Teng chiefdom, in the Kailahun district east of Sierra Leone near the border with Guinea.

So what went wrong? Some observers say when the first confirmed cases were announced in Guinea and then in Liberia, far away Gambia closed its borders and ban direct flights from the affected countries including Sierra Leone, but Sierra Leone was too “liberal” to  take such a precautionary action. Others note that there appeared to be a lapse in vigilance after the incidences of new cases receded in Guinea and Liberia.

This is how the Chief Medical Officer (CMO) Dr. Brima Kargbo, in a radio interview explained the circumstances of the outbreak in Sierra Leone; “3 people of the same family have died of the deadly Ebola virus in Sokoma Village Kissy Teng chiefdom in Kailahun, Eastern Sierra Leone. The first victim was a female Herbalist who has been frequently travelling to Guinea. The herbalist died 3 weeks ago and the husband and child of the dead herbalist contracted the disease and died after entering her room and had direct contact with the body. Now seven people in total who have been admitted on suspicion of the virus were reported to have participated in the funeral of those three victims. The Ministry Of Health and Sanitation was informed on 22nd May 2014 about these seven suspected cases and yesterday, 25th May 2014, the Ministry received reports from the World Health Organization (WHO) certified laboratory in the East of the Country that one out of those seven suspected cases has been confirmed to be Ebolo”.

But the authorities may have decided to leave the borders open after several consultations and not out of negligence; “WHO does not recommend that any travel or trade restrictions be applied to Sierra Leone based on the current information available for this event”.

The question now is; what is the magnitude of the outbreak and what are the measures being taken to contain the disease? The World Health Organization say that “Preliminary information received from the field indicates that one laboratory confirmed case and four community deaths have been reported from Koindu in the Kissy teng chiefdom which shares border with the current Ebola virus disease hotspot Guéckédou in Guinea”.

Regarding current actions, reports from the health authorities suggest that;

”while waiting for additional epidemiological information, the following measures have been initiated by national authorities with support from WHO: meeting of the national emergency Ebola task force to discuss the current situation and proposed preventive and response to be implemented immediately; deployment of a team to the field to conduct epidemiological investigations (http://www.promedmail.org/) and initiated preliminary response measures and development of funding proposals based on the existing national EVD preparedness and response plan. WHO held a three level coordination meeting to review the current situation, carry-out risk assessment based on available data and information and measures to be taken to control the outbreak. These include among others i) immediate deployment of six international experts in the areas of coordination, epidemiology, social mobilization, case management/infection prevention and control, data management and logistics; ii) provision of catalytic funds by WHO to support initial investigation and response activities; iii) development of proposals to access the African Public Health Emergency Fund (funding mechanism established by all the Ministers of Health in the WHO African Region ) and other funding sources and iv) deployment of essential supplies and reagents”.
As all these efforts are being mobilized, the public reaction which may be stimulated by alarmist media reportage and or mix messages from government authorities appear to be the new challenge. Late this afternoon, the Communications Director in the Ministry of Health gave this update:
“Laboratory Test from the Kenema Government Hospital Lassa and other Viral Hemorrhagic Fevers laboratory have confirmed additional cases of Ebola. Sierra Leone now has 7 laboratory confirmed cases of Ebola. Meanwhile, the ministry is also monitoring reports of suspected cases been removed by relatives from isolation units in Kenema Hospital and youths in Kailahun disrupting health workers. The authorities from the Districts have been informed and a team comprising Members of Parliament from Kenema and Kailahun Districts and Ministry officials will leave for the area today to engage the communities and authorities in those districts”

About the same period, the Special Executive Assistant to the President Sylvia Olayinka Blyden 4:24pm May 27 2014 posted on her facebook wall: “One of the Ebola patients who had to flee the Koindu Kissi Teng Community Health Center when Police last evening went to rescue and escort the besieged Medical team sent to FORCIBLY take Ebola patients to Kenema yesterday, has just died at her residence where she had fled with her relatives after everyone, including the Community Health Officer, simply abandoned the Health center leaving the patients to their own devices. Madam KUMBA SATTA was her name. Her corpse has been taken to her village named Korosur, located three miles from Koindu for burial. Meanwhile Kissi Teng Chiefdom Speaker Falla Jusu and Koindu Town Chief Moses Foryoh, inform me that another medical team is expected soon in the chiefdom with other authorities. https://www.facebook.com/kona.feika#!/groups/sl.issues/?fref=nf

Then the editor of ‘NewpeopleOnline newspaper, published an alarming article on his Facebook wall with the screaming headline: “Health Minister Orders Kidnap of Ebola Patients…Police Fire Live Rounds to Disperse Protesters”.

Here are some excerpts from the article “If reports emanating from the eastern part of Sierra Leone from credible sources are anything to go by, then the Health Minister, Miatta Kargbo, is GUILTY of ordering the kidnap and possible secret killing of dying ebola virus patients”…

“And as if on a deadly mission to kill the citizens, the Health Ministry also hurriedly summoned a press conference in Freetown to dismiss a BBC report further raising alarm on the ebola disease”…

“It has been learnt now that the Koindu Community Health Center serving Kissi Teng, the epicenter of the Ebola virus was shut down starting yesterday evening… All the suspected Ebola cases are said to have been abandoned with patients left with the option of returning home and mixing with the rest of the population”. https://www.facebook.com/kona.feika#!/fontricia?hc_location=timeline
In Guinea, fear and misinformation have incited a riot against international aid workers in the area. Believing that foreigners brought the disease, locals in the rural town of Macenta attacked a Médecins Sans Frontières (Doctors Without Borders) treatment center. http://article.wn.com/view/2014/04/05/Mob_attacks_Ebola_treatment_centre_in_Guinea_as_suspected_ca/
Observers say this monstrosity of lack of a national approach to deal with the scourge would only fuel fear and paranoia as authorities try to educate the panic-stricken public on what’s going on. Aid workers are now describing the situation as a distraction from the efforts to temper down and contain the viral disease which has the potential to spread far beyond the eastern region.

The Ebola virus spreads through contact with infected people or animals, mostly through bodily fluids such as blood, saliva and sweat! The virus causes viral hemorrhagic fever, which affects multiple organ systems and is accompanied by external and internal bleeding. Currently, there is no known cure or vaccine for the virus; health care workers can only isolate the patients and treat their complications.  Nearly 90% of people who contract Ebola die. The current outbreak is also believed to be that of the Zaire strain, considered the most deadly strain of five Ebola strains.
Since its discovery in 1976, Ebola has been mostly limited to Central and West Africa. The last major outbreak took place in the Democratic Republic of Congo in 2012, killing 29 people. Around the world, Ebola is estimated to have affected over 1,800 people and killed 1,300.

Downplaying the Ebola outbreak is...