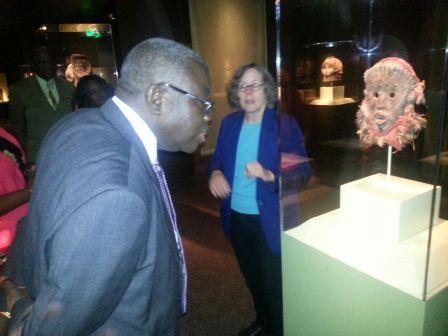 Director, Johnnetta Betsch Cole, Deputy Director and Chief Curator, Christine Mullen Kreamer and Bonnie Berry, Assistant to the Director at the Smithsonian National Museum of African Art in Washington, DC, United States of America, on Wednesday May 21st, 2014 warmly received a four-man delegation from the Embassy of Sierra Leone, who visited an exhibition entitled: “Visions of the Forests”: The Art of Liberia and Sierra Leone” that is currently underway.  (Photo: Ambassador Stevens taking a good look at the Bagle Mask called Slu Hawk made of wood, metal and feathers at the Smithsonian)

The exhibition which was officially opened on April 9th, 2014 will end on August 17th, 2014. The entrance is free and is opened to all.

On arrival, Ambassador Stevens did not only congratulate Director, Jonnnetta Betsch Cole and Deputy Director and Chief Curator, Christine Mullen Kreamer including other authorities and staff for the fiftieth anniversary celebration of the museum but he also thanked them for showcasing the treasures of the Republic of Sierra Leone and the Republic of Liberia.

He gave a brief comparison between the culture and traditions of the two sister countries of Sierra Leone and Liberia and took a tour of the facility.

According to the Deputy Director and Chief Curator, Christine Mullen Kreamer, the Smithsonian National Museum of African Art is exhibiting treasures from the Republic of Sierra Leone and the Republic of Liberia collected by William Siegmann (1943–2011), former Curator of African Art at the Brooklyn Museum, who lived and worked in Liberia from 1965 to 1987.

According to Ms. Kreamer, “Visions from the Forests” provides an exceptional overview of the region’s traditional art forms, including masks and other artworks used in men’s and women’s initiation associations, jewelry and prestige objects of cast brass, ivory, and horn, small stone figures dating from the 15th to 18th centuries, and woven and dyed textiles.

With emphasis on connoisseurship and the identification of specific artists or workshops, the exhibition reveals the deep personal and scholarly connections forged by Siegmann during his many years of research on the arts and cultures of the West African region.

“William Siegmann – Bill”, as scholars and collectors internationally knew him, was a rare individual whose deep-seated knowledge about the arts of Africa and his exceptional eye for quality distinguished him as a true connoisseur.

During many years of research and curatorial work, Siegmann developed a large personal collection of traditional African art, primarily from Sierra Leone, Liberia, and Côte d’Ivoire, which reflected his extensive fieldwork and study and the passion he had for the people and cultures of the West African region.

Several artistic legacies from the Mende, Sapi, Sherbro and Themne ethnic groups were openly on display in the gallery.

On the Liberian side, some works from the Dan, Grebo, and Loma people were also found in the galleries. An early twentieth century Dan or Mano artist mask with shoulder cloth, wood, animal fur, feathers of the great blue Turaco, Cotton and beads: ring with knobs, necklace, tompieme or bagle mask called slu or hawk made up of wood, metal feathers and angbai or nyangbai masks are all on display.

Giving their impressions, all the members of the Sierra Leone Embassy delegation expressed positive sentiments about the exhibition and encouraged Sierra Leoneans to take advantage of the opportunity and refresh their memories.

H.E. Ambassador Bockari Stevens is inviting all Sierra Leoneans, including friends of Sierra Leone and DNA rooted to visit the exhibition and learn more about the cultural heritage of the motherland, Sierra Leone.