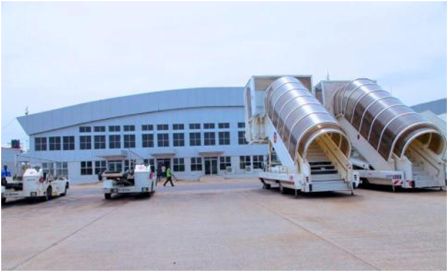 Freetown, March 19 (SLENA) – Following the recent cancellation of flights by British and Kenya Airways, respectively, the Chairman of the National Commission for Privatization (NCP) has placed the management of the Sierra Leone Airport Authority (SLAA) under what he referred to as special measures in order to ensure the efficient delivery of services to the public.

Explaining the new measures at a press conference, the NCP Chairman, Dr. Michael Kargbo said SLAA will now be managed using Performance Tracking Tables to monitor its performance, stressing that during this period the NCP will ensure that the management of the airport is subjected to rigorous monitoring measures which will include the holding of meetings with senior management staff on a weekly basis and the strict enforcement of timelines.

In a statement during a press conference at the Lungi airport, Dr. Kargbo noted that the incident that led to the cancellation of flights to Lungi was damaging to the country’s image abroad and that the incident could have been prevented, stating that an investigation panel will be set up to look into what he described as an unfortunate incident.

“The investigation will be devoid of witch-hunting,” he assured.

It will be recalled that a couple of weeks ago flights to Lungi airport were cancelled due to the malfunction of one of airport’s fire engines, thus rendering the airport temporarily incapable of meeting the required security standards set by the International Civil Aviation Organization.

The situation was however remedied after a decision by the NCP Chairman in collaboration with the Minister of Transport and Aviation by temporarily replacing the faulty engine with one from the National Fire Force.

The new chairman, who has been in office three months ago, pledged his commitment to make sure that the mandate of the commission is executed diligently and professionally with a view to benefiting the people of this country.

The NCP has a mandate under Act 2002 to act as a prudent shareholder on behalf of the government of Sierra Leone in companies where government is a shareholder.

Meanwhile, NCP has appointed a Communications Officer in the person of Mr. James Tamba Kamara with responsibility to help propagate the activities of the commission to stakeholders including the media and the general public.