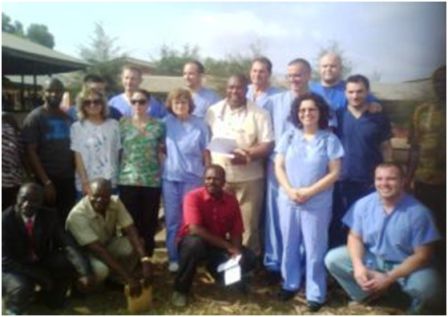 Tonkolili, March 20 (SLENA) – The All Peoples Congress (APC) Member of Parliament representing constituency 63, Tonkolili district, Hon. Dr. Abdulai Sesay commonly known as Dr. ADB has flown in thirteen medical doctors from the United States of American at the Magbenteh hospital to perform free of cost surgery on fifty (50) patients suffering from all kinds of diseases.  (Photo: Hospital staff and the 13 doctors)

According to the Interim Manager of the hospital, Ibrahim Bangura, this was not the first programme that the Foot Print Mission has undertaken but a continuity of their project as they have always been around to help strengthen the good work of the hospital by rendering help to the people of Makeni and Yele in the Tonkolili district.

He said the people of Gbonkolenkeh appreciated the mission’s good initiative and promised the judicious use of the drugs provided.

In his opening statement, Hon. Dr. Sesay commended the mission’s laudable initiative, noting that it was not the first time such free operation was done in that part of the country.

He said of the thirteen man delegation, two are surgeons whiles the eleven are medical doctors, adding that the beneficiaries will not only be limited to Makeni but also to the people of Yele, who he represent in parliament.

Hon. Sesay said his people are afflicted with lot of sicknesses which they cannot afford to pay the cost of operation but with the intervention of the Foot Print Mission there is hope for them.

He said among the many challenges that the hospital is faced with is funding, saying there was no way a hospital can function effectively without financial support and because of lack of funds, the activities of the hospital came to a standstill.

The Chief Medical Officer of the Hospital, Dr. Sallieu Samba Turay said the Foot Print Mission came in timely after NGOs had abandoned the hospital following the end of the war. The hospital, he went on, used to cater for amputees and war wounded victims, noting that patients visit the hospital every day but with no money to pay for treatment, such as surgical cases.  “We cannot just throw them away just like that as they needed help but with lack of funding, we cannot render better and quality health service,” Dr. Turay lamented.

Leader of the delegation, Dr. Jeff Smith said the aim of the mission is to seek the interest of the needy around the world and since 2009 when they formed the mission many have benefited from their service.