Senegal to participate in Chamber of Commerce Trade Fair Exhibition

Senegal to participate in Chamber of Commerce Trade Fair Exhibition

This confirmation was officially disclosed to the Sierra Leone Mission in Senegal by the Senegalese Agency for the Promotion of Goods for Exportation (ASEPEX) in response to an invitation by the Sierra Leone Chamber of Commerce.

According to Mr. Aly Mboup the Secretary General of the Senegal Chamber of Commerce, this is the first time that Senegal has opted to take part in the Sierra Leone organized International/National Trade Fair Exhibition. He noted that such an initiative/ venture will definitely give wider publicity and exposure for business investments and trade collaboration between both countries and even beyond.

The Sierra Leone Mission in Senegal after series of meeting with officials of the Senegal Chamber of Commerce has confirmed that modalities are presently being put in place for a high powered delegation from the Sierra Leone Chamber of Commerce to lead a Trade delegation to Dakar for a meeting with their local and foreign counterparts after which, a Memorandum of Understanding would be signed and followed by a Press conference.

Senegal has Among others to exhibit :- clothing/textiles, building materials, cosmetics,  Arts and crafts and services.

It must however be made clear, that according to ECOWAS Trade rules among member states, that no taxes are levied on locally manufactured goods. However handling charges will be paid.

In another development with regards on- going arrangement between the Sierra Leone Mission in Senegal and the Ministry of Fisheries and Maritime Affairs of Senegal for a commercial vessel to ply the Dakar /Freetown sea route, the Minister of Transport and Aviation Logus Koroma has extended a letter of invitation to his Senegalese counterpart Hon. Ali Haidar to visit Freetown in order to sign a memorandum of understanding.

This initiative by H.E Ambassador Khadijatu Basir according to the Senegalese Minister if come into fruition “will no doubt enhance trade and social visits between the two countries and beyond and would be a corner stone and legacy of her achievement during her tenure of office”.

Minister Haidar informed that negotiations for the purchase of three boats are far advanced and assured that one would be put at the Senegal – Sierra Leone sea route passing through Guinea Bissau, Gambia and Guinea.

Thou Shall Eat Foundation feeds Ab... 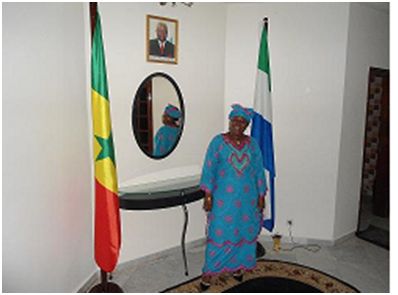