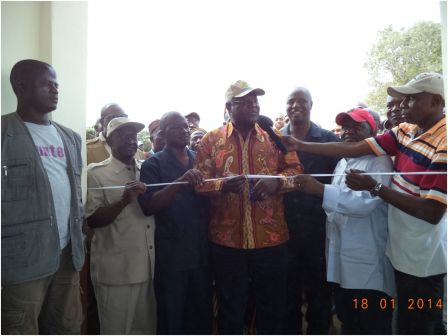 History was made in the Koinadugu District over the weekend when President Ernest Bai Koroma commissioned three schools built and equipped by popular businessman and philanthropist, Mr. Momoh Konte.

Addressing the people of the Hedemakono and Kabala townships on Saturday, January 18, President Koroma stated that he had to personally go and commission the schools because of the importance he places on education.

He said he was particularly moved because of the lack of sufficient schools in the Koinadugu District, maintaining that he saw his presence as a manifestation of the seriousness his Government places on education as a very pivotal pillar of the Agenda for Prosperity.

The president maintained that he was very hopeful that with Mr. Momoh Konte’s intervention education will now receive a new lease of life.

He called on the people of Henemakono and Kabala to protect the school equipment and to report to the authorities anybody caught stealing or destroying the schools or the furniture or other properties of the schools.

President Koroma enjoined the parents and guardians of the school children, especially the girls, to encourage their children to go to school and to love their books and discourage them from early marriage and teenage pregnancies.

Describing Mr. Momoh Konte as a fine patriot, he said he wanted to see more Momoh Kontes in this country.  He appealed to all Sierra Leoneans to emulate Momoh Konte’s kindness, selflessness, and generosity.

In his tribute to Mr. Momoh Konte, Paramount Chief Alie B. Marah of Sengbe Chiefdom said he was not surprised with his generosity and development-oriented nature as his late father, Hon. Kawusa Konte was a philanthropist who was always ready to help the poor and needy whenever and wherever he met them.

He recalled that last year Mr. Momoh Konte donated the sum of Leone 30 million to the Kabala Secondary School to assist underprivileged children.

In his comments, Reverend Father Henry Magbity said it takes a lot of passion and love for someone to sacrifice his personal wealth to help men and women he may never even know nor normally have dealings with.

He said Mr. Momoh Konte is a true manifestation of a man with the heart of God, who, he maintained will always remain in their thoughts and prayers.

Responding to the sentiments, Mr. Momoh Konte said he was helping the children as his own contribution to the development of education in the Koinadugu District. He stated that it was heartrending to see the thousands of children who cannot go to school and learn because their parents or guardians are poor and cannot afford to send them to school.

He stressed that he was not helping his people because of any political ambition but just because he feels that he has the moral responsibility to wipe away the tears of those poor people who yearn for education but cannot afford it.

He pointed out that he wants to extend his assistance to other areas of the country,

He said he was especially appealing to the Teachers to encourage their pupils to study Mathematics, Technology, Biology, Health Science, Physics, and Chemistry.

He revealed that in recognition of his selfless service in the field of education to the people of the Koinadugu District, he and the Kabala Secondary School authorities have decided to call the school building the Owen Jones Building.

He explained that a very long time ago, Mr. Owen Jones, a Krio man, left the luxuries of Freetown to live in the remote Koinadugu District where he educated and shaped the lives of many children, including himself.

Agriculture, Food and Security at...