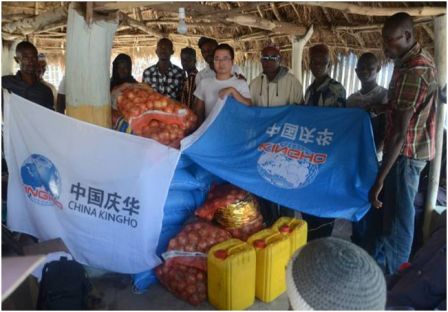 As part of its corporate social responsibility, the China Kingho Investment Company (SL) Limited has donated food items worth over Le 14 million to the local people in the Kafe Simira and Tane Chiefdoms in the Tonkolili District to celebrate the festivals of Christmas and New Year. (Photo: Kingho Investment Company handing over the Christmas and New Year gifts to residents of Tane Chiefdom at Matotoka)

The donated items included food items which comprised of bags of rice, onions and palm oil as well as other consumables.

At the handing over ceremony of the donation, Mr. Maxwell Bangura, the councilor for Ward 222 in Kafe Simira, gave a brief introduction about the donated items and explained the gradual progress of Kingho Investment Company in Sierra Leone.

Mr. Mamoud Jah, one of Kingho’s representatives reminded the people that the donated items served as a testament to the lasting relationship between the people of both chiefdoms and Kingho Investment Company Limited.

He also said that the company knows its corporate social responsibilities and will continue its obligations to the people of Kafe Simira and Tane Chiefdoms.

Mr. Bob Cao, a Supervisor from the Public Relations Department of Kingho, encouraged the people to accept the goods and share it peacefully among themselves. He also commended the people for their full support of the company’s undertakings and that the company is grateful to them.  He promised that in 2014, there would be more donations from the company and ensured that all the people will benefit from it.

The Section Chief, Mr. Unisa Bangura at Makelfa gave his sincere thanks and appreciation to Kingho Investment Company. He said, on behalf of the villagers that they were very grateful to the company for their kind gesture and that they are praying that Kingho will achieve their ultimate goal in Sierra Leone.

Pa Komba Bangura, Town Chief of Sokoya village in Kafe Simira Chiefdom, also praised Kingho for their fruitful venture in the North and hoped that both the company and the chiefdoms would benefit from this venture.  He maintained that Kingho will continue to fulfill its social responsibilities to the people.

Speaker of Tane Chiefdom, Chief Thomas Koroma and the Paramount Chief’s brother, Mr. Alhaji Turay, also extended their sincere appreciation to Kingho Investment Company on behalf of the Paramount Chief for the immense efforts of the company. They added that these goods were indications for the people to understand that they should always be friendly with Kingho.

Kingho representatives in both Chiefdoms thanked the people for their support to them in 2013 while emphasizing that the relationship between the company and the people must last longer and get stronger. They prayed that 2014 will be a happy and prosperous year for all of them.