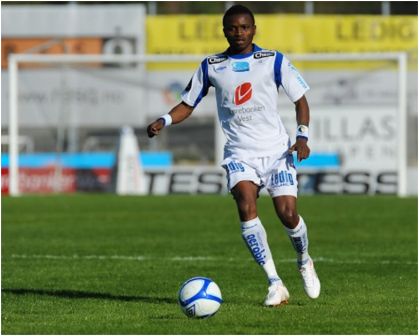 The announcement was made during  a live radio sports programme aired worldwide by sierraleonefootball.com on Sunday, a day after the voting ended.

“I’m happy to win the award and I dedicate it to my family and fans,” said the 26-year old Bangura after the announcement.

The first time winner of the prestigious award added: “I know it was tough because the others in the race are also good players.

“But I think I derserve it as I gave my best for my club and country. I’ll always do my best for my country and club.Thanks to the viewers of the website for voting me.”

“I helped my former Norwegian club Haguesund to qualify for the Europa League and I won the club’s best player award.

The sierraleonefootball.com award has inspired me to do more and I hope it’ll inspire other players to do well. This is a big boost for me to give out my best for my new Belarusian club.”

Bangura was against four other shortlisted players John Bankole Kamara based in Greece, FC Johansen’s George ‘Kweku’ Davies and the England based duo of Kei Ansu Kamara and Mohamed ‘Medo’ Kamara.

The former Mighty Blackpool defender got over 47% of the votes recorded from 38 countries in Africa, Europe, Asia and America, beating Medo Kamara to second place by 20%.

Bangura will receive a glittering silver trophy with his name written on it.

The five shortlisted players received the highest number of votes by Sierra Leonean Sports Journalists last month qualifying them to be voted by viewers of the number one website on Sierra Leone football www.sierraleonefootball.com

They were nominated based on their performances at both club and national team levels.

Bangura was consistent in his good performances for both club and country.

He played each and every minute of Leone Stars’ five matches in 2013, and at club level, played a vital role to see FK Haugesund qualified for the Europa Cup for the first time in the club’s history and was named the club’s player of the season.

He had played for other Norwegian club Honefoss and Sierra Leone Premier League side Mighty Blackpool.

Bangura made his international debut for Leone Stars against the Eagles of Mali in 2006 in a 2008 African Cup of  Nations qualifying match and since then has been a regular player in the team capped 29 times.

He’s intelligent, good on the ball and can also operates in the midfield. He’s believed to be one of the finest defenders Sierra Leone has ever produced.

Winners of the sierraleonefootball.com Player of the Year Award

Combating corruption - The rise of...