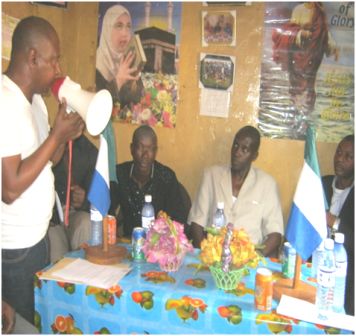 Trade and Industry Minister, Usu Boie Kamara has spoken tough and frank to traders in Makeni. He was given a rosy welcome where he held talks with authorities in that part of the country on local content policy.

The Minister spoke frankly with the traders at their small Union office at Flower Corner before he pursued to Kono and possibly, Tongo, in the east part of Sierra Leone.

In his opening remarks, the Union’s Secretary General in Makeni, Mr. Amitab informed the Minister of a pipeline skyscraper market construction which will obviously have the traders relocated to some other areas for demolition of the old market structure in replacement for the new.  Secretary Amitab pleaded with the Minister to intervene on their behalf for a softer approach of the authorities including the Makeni City Council.  Amitab further asked the Minister to help the traders Union with office structure and micro credit facilities. Amitab told the Minister that each time his colleague traders go for a loan from a Bank, they are usually tasked with at least, Le300,000 collateral for anything like Le5 million loan. That condition has not been easy with us he stated.

Traders Union Chairman, Mr. Alie P. Conteh aka Kalusha Bwalya did not say much rather than asking the Minister to clear the air over the ongoing allegations that he received on behalf of traders; a sum of Le 80m from the Minister.

In his strong and sincere words, Minister Boie clarified the allegation as false and baseless, and that he does not deal with individuals rather than organizations.  He warned against falsifying and fabricating allegations on responsible authorities; adding that, those are some of the factors responsible for hampering meaningful organizations.

To the traders’ demand for office structure, Minister Boie reminded the traders that he had sometime assured them to seek out for one. Dilating on the micro credit appeal of the traders, Minister Boie stated that the Japanese have helped his Ministry through the government of Sierra Leone with some money. Some part of that money will be used to help with micro credit facilities, but on a more serious note: it has go along with proper scrutiny of record and character, because many he noted, have been in the habit of loaning and refusing to pay back in return. He also informed the Traders that  part of the laid down money will be used to construct market structures to keep the traders in shelters. I will have to engage the necessary authorities including the Mayor of Makeni City  on the market demolition and relocation demands of the traders.

The Minister also stated that everywhere in the country; fellow Sierra Leoneans cry for employment facilities. Hence provided, the very people seriously delve into stealing and discouraging the employers, which he noted, does not help them neither the state. He however appealled for a change of that attitude for a better Sierra Leone. 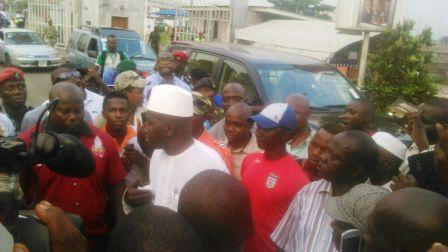