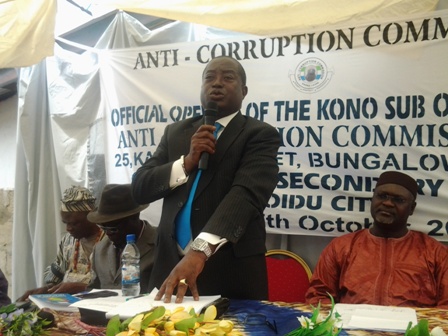 In testament of its resolve to take the national fight against graft to every corner of Sierra Leone, the ACC on Thursday 17th October, 2013 officially commissioned the sub-regional office in Koidu City, Kono District.   (Photo: Attorney General and Minister of Justice Franklyn Bai Kargbo)

The office which is the first sub regional office in the country is very crucial in the fight against corruption considering the strategic and pivotal role Kono District plays in the economy of this nation.

Representing His Excellency the President Dr. Ernest Bai Koroma, the Attorney General and Minister of Justice Mr. Franklyn Bai Kargbo conveyed His Excellency’s thanks and appreciation to the  ACC for the tremendous work they have been doing over the years. Mr. Kargbo informed his audience that since his days as opposition leader in parliament, President Koroma advocated for the strengthening of the ACC by giving them the legislative powers needed to make them effectively fight corruption.  That was why in 2008 parliament in keeping with the vision of the president passed into law the 2008 Anti-Corruption Act which increased the corruption offences, made stiffer penalties and gave prosecutorial powers to the Commission which made the Commission more robust in its fight against corruption. The Attorney General and Minister of Justice on behalf of the President reaffirmed government’s commitment to fully support the Commission and its effort to fight corruption. The Minister highlighted government’s support to the ACC in budgetary allocations and capacity building, among others. He encouraged his audience and all Sierra Leones to join the government in giving their unflinching support to the ACC and imbibe the concept of integrity.

In his statement, the Resident Minister East, Hon William Juana Smith traced corruption as far back as the colonial days and gave the background to the establishment of the ACC and catalogued the efforts government is making to address corruption. He highlighted some of the interventions by the ACC in the Eastern Region especially sensitization, community meetings, monitoring of MDAs like the Councils, Health, Education the power sector etc for the people in the Eastern Region that have resulted into improved service delivery. The indictment of nine public officers on various corruption offences including a health worker from Kono and a Principal of one secondary school in Kenema has not only marketed the ACC but sent a signal to the public in the Eastern Region about the effectiveness of the ACC. The Minister stated the importance of the mining sector to the economy of the nation and requested the Commission to pay special attention to that sector in ensuring that government revenues are protected.

The Commissioner of the ACC Joseph Fitzgerald Kamara (Esq) in his statement thanked the people of Kono for their warm embrace and support to the ACC.  He stated that the establishment of the ACC Sub-Regional office was born out of the desire of the ACC to continue rolling out its activities across the entire country. He mentioned the strategic importance of Kono District to the national economy and stated that the ACC was in Kono to stay stating that for the ACC to succeed and benefit the people of Kono, it largely depends on the unflinching support of all, especially the people of Kono.  He attributed the poor road network, low standard of education, poor healthcare delivery and other services to corruption and mismanagement.

The ACC Commissioner mentioned that the country has gone a long way in the fight to promote transparency, accountability and good governance which has seen it gain international accolade like the recently released Mo-Ibrahim index which rated Sierra Leone and Liberia among the fastest growing African countries in terms of good governance in the past six years. He attributed this to the corruption control measures of the country which he stated has increased by 14.9%. He encouraged his audience to play leading and active roles in the development of this nation by resisting, rejecting and reporting corruption adding that there is no hiding place for corrupt persons.

Earlier in his opening remarks, the Chairman of the occasion, Director of Intelligence, Investigations and Prosecutions in the ACC, Mr. Reginald Fyn (Jr.) indicated the damaging effects of corruption on the people and economy of Sierra Leone maintaining that the ACC was committed to the continuous provision of steadfast and robust leadership in the national fight against graft at all levels.

The pouring of libation was done by the Vice Chairman, Council of Paramount Chiefs Kono District P C Emmanuel Torchequee Foryoh of Sowa Chiefdom. The cutting of the tape was done by the Attorney General and Minister of Justice Frankly B. Kargbo followed by a conducted tour of the new office.