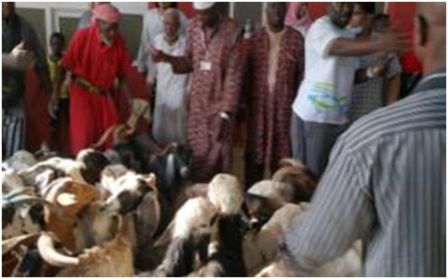 Hundreds of Sierra Leonean pilgrims have commended the Government of Sierra Leone for the amount of transparency its officials in the Sierra Leone Hajj Mission headed by the Minister of Social welfare and Gender and Children’s Affairs, Hon. Alhaji Moijueh Kai Kai have shown at this year’s hajj program.

Speaking at the tent city of Mina after witnessing the slaughtering of lambs – one of Hajj rituals which pilgrims offer from the 10th – 12th day of the Hajj month, many Sierra Leoneans expressed thanks to the President, Dr. Ernest Bai Koroma for his relentless support to Sierra Leone pilgrims since Government took over the pilgrimage affairs in 2010.

In the past, many people were raising suspicion over the slaughtering of Lamb. This time around, the Government of Sierra Leone decided to ensure that the pilgrims themselves witnessed the process.

Abdulai Koroma is one of the pilgrims and also the President of Sierra Leone Teachers Union. He witnessed slaughtering of the sheep and he expressed thanks to the President for the highest level of transparency his government manifested in the Mecca so far. Mr. Koroma further disclosed that the pilgrims are very much pleased with the way the process was conducted.

The representative from Kailahun District, Alhaji Mustapha Kanneh expressed similar view. He said this latest transparency the Government has exhibited shows how serious it is to implement the Agenda for Prosperity.

Speaker after speaker commended the President and his Government for this latest action in the holy land of Mecca. They described this year’s pilgrimage as an overwhelming success.

It could be recalled that last Wednesday, the head of the 2013 Hajj, Moijueh Kaikai led over 20 pilgrims to witness the slaughtering of 500 Sheep. The following day, Alhaji M.S Kargbo, Deputy Leader of the Hajj Team also led more than 20 Pilgrims to witness the slaughtering of the remaining 425 Sheep. The 916 Sheep represent the number of Sierra Leone pilgrims that arrived on the 5th and 6th November respectively and 4 representing the advanced team that arrived on 1st October. The remaining 5 are penalties for a few pilgrims who passed the Miqat without being in the state of Ihram.

Those who witnessed the process included, a University Professor, Paramount Chiefs, Members of Civil Society, a member of the Open Government Initiative (OGI), Journalists, and representatives from the 12 Districts in Sierra Leone including the Western Urban/Rural area, among others.

By Alhaji Dauda Musa Bangura and Alhaji Jalloh
Stay with Sierra Express Media, for your trusted place in news!

Seminar for Local Councils on gran...