The seminar for Local Councils on Grant distribution for FY 2014 for the Social Welfare sector organized by the Local Government Finance Department {LGFD} in the Ministry of Finance and Economic Development have kicked off at the Madam Wokie hotel in Bo on Wednesday 16th October 2013.The seminar brought together heads of devolved sectors, chairperson & chief Administrators of Local Councils, Parliamentarians and Senior Officials of line MDAS.

The objective of the seminar was to give opportunity to the new set of chairpersons, councilors, devolved sector heads and other stakeholders, have an understanding of the grant distribution system. The seminar provided an opportunity for all stakeholders to brain storm and suggested variables indicators that can be used to distribute grants relating to their respective MDAs, which will promote ownership by the respective MDAs, and will minimize the concerns expressed by stake holders regarding the choice of indicators used in previous years The service requirement for this sector seemed to be expanding due to current emerging social issues bordering on all categories of people and ages. These issues are expected to be addressed by the sector with no recourse to its yearly budget allocation. It was suggested that with such expansion in service requirements, the MSWGCA was advised to make a very strong case to the ministry of finance and economic development for the allocation of additional funds to the ministry, and by extension for devolved services.

Members were informed that the inclusion of the sector for the transfer of DSDP II would now provide space for those activities councils would not implement due to the minimal allocation of funds from GoSL. Table 7 below gives a brief background of indicators used for the period under review.

There was need to make adjustment in the indicators as well as the weights due to varied circumstances in the country. The population of children was classified as people between the ages 0-17 years as against 0-19 years then. The aged as an indicator was added which was classified as being between the ages 60 and above. In a similar vein, all physically challenged were now considered as disable. Hence, the agreed indicators and weights are shown in table 8 below.

Councils were cautioned that DSDP funds will only service issues relating to social assistance services for the disabled and other vulnerable groups. The MSWGCA representative who led in this discussion endeavored to simplify some key technical terms to avoid misconception.

On the issue regarding the conflicting roles in some councils in implementing sector services, it was agreed that the implementation of devolved social welfare services remained to be the responsibility of the district social welfare officer.

In conclusion, councils were required to make and enforce regulations in their various localities. A typical one could be that alcohol sale is prohibited to all children. In this vein, a reference was made to the Child Right Act, 2007, Sect 58 “A district council shall protect the welfare and promote the rights of children within its area of authority…”

All Eyes on 5th International Afri... 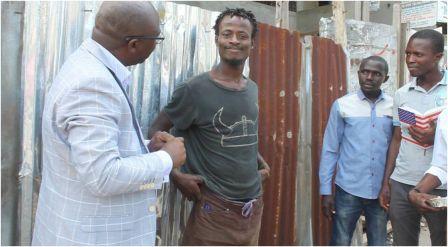 As he Counsels the mentally challenged M...