This Week In: English Football – Premiership and International Roundup 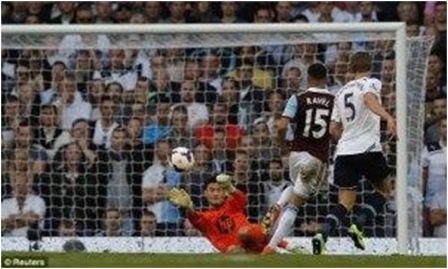 This Week In: English Football – Premiership and International Roundup

When you support a club side, the international break can often seem like a two-week malaise when you are merely waiting for the fixtures between nations to be over and done with, before the more serious business of Premiership football returns.  Do not get me wrong, I love the World Cup and European Championships, but I have no fervent rooting interest in the way that I do at a club level, so my enthusiasm for qualifiers or friendlies is never quite as strong.  However, on this occasion the Premiership intermission gave me an extra week to calm down from the mediocre performance Tottenham put in against West Ham, allowing me more time to let my frustration with their ineptitude quell, and the sheer annoyance at yet another missed opportunity thanks to a lackluster display…okay maybe my anger has not yet completely dissipated from that match.  Ostensibly, Spurs have had a strong start to the season and the fact that they are only three points behind the top two – Liverpool and Arsenal – at this early stage should be encouraging, but in the three matches that matter most to Tottenham fans that have been played thus far – against the Gunners, Chelsea and West Ham – we have managed to gain only one point.  For their part, the Hammers completely deserved to win at White Hart Lane for the first time since 1999, as they absorbed the first half pressure from their hosts, then pounced to catch them on the break and at set-pieces after the interval.  It was a well designed game plan from Sam Allardyce and his team’s cause was helped by the fact that it was West Ham’s players who looked hungrier for the ball and had the greater desire to win, whereas those in the white of Tottenham appeared to have fallen into the trap of believing their own hype, thinking they only needed to turn up to beat a side who had not taken three points since the opening day of the season.

If I had been writing this a week ago, I would have been again bemoaning the consistent selection of Andros Townsend on the right in favor of Erik Lamela, with the young Englishman putting in solid performances, but shooting far too often given his distinct lack of goals.  However, while on international duty Townsend ruined that narrative, as he scored on his debut for England with a nice shot from outside the area that put the game beyond Montenegro’s reach at 3-1 (with the final score being 4-1); then it was his cracking left-foot shot from 25 yards that crashed against the crossbar that led to a period of sustained pressure for Roy Hodgson’s goal that ended with Wayne Rooney breaking the deadlock against Poland.  The two victories and six points confirmed England’s place in the 2014 World Cup – with Townsend suddenly an almost certainty to have a place on the plane to Brazil if he can continue to show anything like that form – while the Ukraine will be forced to go via the playoffs, as they finished second in Group C after beating Poland and San Marino in their two fixtures this week.  The other sides from Europe who can book their places in Brazil are Italy, Spain, Germany, Switzerland, Belgium, Netherlands, Russia and, for the first time at a major international tournament, Bosnia-Herzegovina; while the other nations in the playoffs with the Ukraine are Sweden, Greece, France, Portugal, Iceland, Croatia and Romania, with Denmark missing out as the second-placed team with the worst overall record.

The biggest story of the World Cup qualifiers came in the “Hex”, the final round of the CONCACAF region qualification, where Mexico were forced to rely on the United States to save them from elimination with a late comeback against Panama.  Going into the last round of fixtures, Mexico were hoping to qualify without going into a playoff, but that hope was dashed by a 2-1 defeat in Costa Rica, while Honduras claimed the last automatic spot with a  2-1 victory in Jamaica.  After losing their match, the Mexicans were forced to root for the USA to get a result against Panama, but with 7 minutes to go the home side took the lead and it looked as though they were going to face New Zealand in the playoffs, until two injury time goals by the Americans rescued Mexico.  If the old rivals end up meeting in Brazil – assuming Mexico get past New Zealand – then many Americans may think it would have been better to have let Panama win, but the victory meant that the USA matched the record number of points any nation has ever achieved in the Hex and they should be in good shape for next summer’s World Cup, even if they end up facing Mexico.

There was also the first leg of the playoffs in the African qualification region, with the final 10 teams competing for five places in Brazil.  The most notable scoreline was Ghana’s 6-1 thrashing of Egypt, all but ending Bob Bradley’s side’s hopes of making the World Cup, but the former manager of the USA national team should still be commended for the job he has done with that team during a period of turmoil for the country.  In the other playoff games, Burkina Faso are on the brink of their first appearance at the World Cup following a 3-2 victory over Algeria; Tunisia and Cameroon drew 0-0; Nigeria had a 2-1 victory in Ethiopia; and Côte D’Ivoire beat Senegal 3-1.  Finally in South America, Chile and Ecuador joined Argentina and Colombia as the automatic qualifiers from the region, while Uruguay finished fifth and face an Intercontinental playoff against Jordan next month to join them.

Back to the Premiership action from two weeks ago and Arsenal’s run of victories came to an end, but they remained top of the table on goal difference after a 1-1 draw away at West Brom.  Liverpool are now level on points with the Gunners after a 3-1 victory over Crystal Palace; with Chelsea behind in third place following their 3-1 away win at Norwich, which included Willian’s first goal for the London club following his summer move.  Everton suffered their first defeat of the season, but they were a little unlucky as they had looked the better side in the opening half hour of their match at the Etihad against Manchester City, but they conceded less than a minute after Romelu Lukaku had given them the lead and eventually Sergio Aguero found his scoring boots – as he had early missed a couple of golden chances – and subjected Roberto Martinez to his first loss as the Toffees manager.  Manchester United avoided a third consecutive Premiership defeat as they came from behind to beat bottom club Sunderland – who have since appointed Gustavo Poyet as their new boss – 2-1 at the Stadium of Light, with youngster Adnan Januzaj scoring both goals.  Elsewhere, Southampton climbed up to fourth with a 2-0 win over Swansea; Fulham eased the pressure on Martin Jol with a 1-0 victory against Stoke, secured by a late Darren Bent strike; Hull and Aston Villa drew 0-0; and Newcastle enjoyed an impressive 2-1 away success at Cardiff.

This weekend, Liverpool travel to Newcastle for the early kick off on Saturday and will have the opportunity to move into top spot, at least for a couple of hours before Arsenal’s home game against Norwich.  Manchester United take on Southampton, who are four points and five places above them in the table; while City travel to West Ham;  Chelsea entertain Cardiff; Sunderland are away at Swansea; Everton host Hull; and Stoke face West Brom.  On Sunday, Aston Villa may have Christian Benteke back in time to face Tottenham, who won 4-0 at Villa Park last season in the league and earlier in this campaign in the League Cup; while the Monday night fixture is the not-to-be-missed* clash between Crystal Palace and Fulham.

*It’s probably best if you do miss that one.

Sierra Leonean tortured to death i...