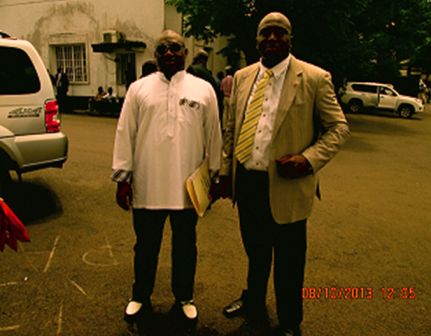 Minister of Lands and Environment Hon. Musa Tarawally has in an interview with this writer, said his attention has been drawn to an article in a local newspaper last week, enquiring and at the same time speculating his whereabouts, noting particularly that he has not been seen in public for some time now.  (Photo: Minister Tarawally and Alim at State House)

Reacting to the newspaper (when this writer caught up with him in discussion with a party member Alim Bangura at State House),  Musa Tarawally had this to say –

“I am no doubt a very busy Minister.  I mean officially busy with State Affairs. As you know I also double as the party’s Organizing Secretary, so you can see to what extent your Minister is occupied.”

According to the Lands Minister, he is not a controversial man as some people try to paint him, but rather a cool headed man, but no doubt hard in implementing his Ministry’s directives and government policies, particularly with regards one of the difficult Ministries to handle and manage.

“Ralph, tell your colleagues that though they say they have of late not seen me around but I am seeing them up and around and as I did say earlier Musa Tarawally is officially busy with State Matters.  Maybe again (I do not know) it can be one of Musa Tarawally’s strategies to cut short their pages of news.”