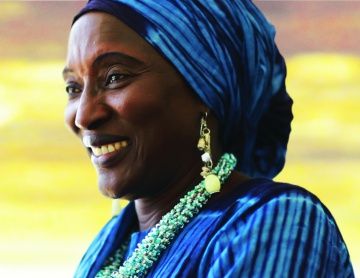 PARIS, France, October 17, 2013/ — Yesterday evening, two projects to effect change for African women and girls received the Women for Change Award, which was created this year for the 9th Women’s Forum Global Meeting by Orange Foundation and the Women’s Forum, in partnership with Marie-Claire magazine. The award was created to train the spotlight on women who have effected change and driven growth, and to enable them to develop their humanitarian projects on behalf of women and girls.  (Photo: Anta Mbow [Senegal]: hope for the girls of Dakar)

Following a selection process that included both Internet participation and live voting during the opening dinner of the Women’s Forum Global Meeting honouring the initiative, the Women for Change Award was given to Maria Raharinarivonirina, Madagascar, and Marie Nomo Messina, Cameroon, who were chosen from among the five women who presented their projects:

The “SOS Children’s Villages of Madagascar” association aims to make the women of the Grand Sud of Madagascar independent through four new women’s homes.

The “Hand in Hand” association takes in children who have been abandoned or who are in great distress at the Romulus & Remus centre, where they receive health care, education and the training they need for their social reintegration.

Anta Mbow / Senegal: hope for the girls of Dakar

The “Empire of Children” association, which is already working for the reintegration of disadvantaged Senegalese boys, is creating a centre for girls in serious social and familial difficulty.

The “A.I.L.E.S.” association (aid, information, freedom, hope and solidarity) wants to broaden its activities on behalf of women who are former addicts and outlawed from society after drug withdrawal to build and strengthen their ability to work by helping them to create micro-enterprises in their homes.

“Acacialma”, a women’s cooperative in the village of Bir Salah, wants to strengthen women’s abilities and independence by developing economic activities led solely by women in a rural environment.

These projects were presented on the http://www.fondationorange.com website from 15 September to 15 October 2013 to allow Net users to learn about them and vote for the one they felt was most important.  Almost 10,000 votes were recorded, resulting in the selection of Maria Raharinarivonirina’s project (Madagascar).

On Wednesday 16 October, during the opening dinner of the Women’s Forum Global Meeting in Deauville, attendees were given a presentation of the projects and were able to vote for their favourite one using a live, interactive NFC service (near field communication) set up at each table. Marie Nomo Messina (Cameroon) won the vote.

Maria Raharinarivonirina and Marie Nomo Messina each received a grant of 25,000 euros for their projects. The Net users’ award was presented by Christine Albanel, Deputy Chairwoman of Orange Foundation, and Christine Leiritz, Editorial Director of Marie Claire magazine, while the “interactive opening dinner by Orange and the Woman’s Forum” award was presented by Véronique Morali, Chairwoman of the Women’s Forum for the Economy and Society.

Distributed by APO (African Press Organization) on behalf of Orange.