Born in Freetown, the Afro-beat super star who was known for the Manzo avec Ceebolt group, he disclosed that he has no doubt he is back in the minds of his fans because of his greatness in music.

He stated that he has been singing since 1999 and that he was more active in 2003 when his group Manzo avec Ceebolt stormed the music waves with their debut musical album, “My woman.”

He further disclosed that they produced three musical albums, “My woman,” One in a million’’ and the yet to be released twelve track album, “Stay.

“I will never be too far away from Mohamed Manzo Rogers, because he is my brother even though he has decided to stay in the United States of America while I am still in Sierra Leone to further pursue my dreams as a musician,” he noted.

He paid tribute to the French national and Isreali born producer and engineer, Charles Ostrov, who he said has been of great help to him.

According to Charles Ostrov, Ceebolt has been one of the grateful musicians he has worked with, adding that he is currently producing for him more videos that are expected to be on sale soon.

Sexual harassment on the increase... 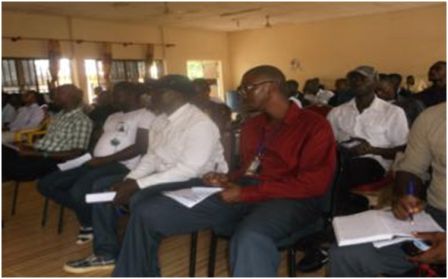 Journalists trained on Ebola in Kenema