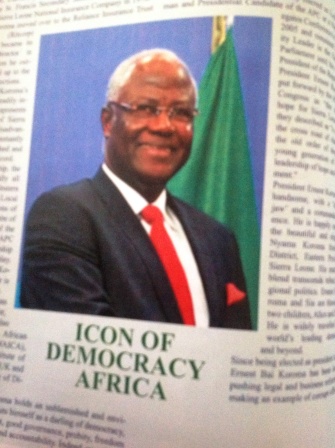 Barely a month after clinching a meritorious award in the United States of America, Sierra Leone’s President Ernest Bai Koroma has again emerged as the proud winner of this year’s The Voice Magazine Achievers Award in Holland (The Netherlands).  (Photo: President Koromas portrait on display at the hall during the awards ceremony)

In his citation before announcing this year’s golden winner, the Magazine’s Chief Editor, Nigeria-born, Pastor Elvis Ndubuisi Iruh said, “whilst we’ve been searching for an icon in Africa, we made a thorough and effective research in the entire continent and the bulk falls on the President of the Republic of Sierra Leone, Dr. Ernest Bai Koroma”, amidst thunderous and deafening applause from the audience.

Pastor Elvis added that from their research, the President of Sierra Leone holds an unblemished and enviable public record and spouts himself as a darling of democracy, the rule of law, human rights, good governance, probity, freedom of the Press, transparency and accountability. “Since been elected as President in 2007, Ernest Bai Koroma has been keen on pushing legal and business reforms, and making an example of corrupt officials. He is indeed the hope for Sierra Leone”.

However, though President Koroma was unable to physically present to receive the award due to other state engagements, the Head of Chancery at the Sierra Leone Embassy in Brussels, Haja FB Wurie commended the organisers for the unique honour bestowed on President Koroma. She promised that the Embassy will work collaboratively with the organisers to ensure the possibility of the President receiving the award in person in April next year when he’s scheduled to attend the EU/Africa Summit in Brussels.

Giving a brief background of The Voice Magazine in Holland, Pastor Elvis informed his audience that the magazine was established in 1999 at a time when there was practically nothing to refer to as a news medium for Africans in Holland.

The Voice news magazine, he added became a relief to thousands of Africans. “14 years ago with our formidable team, we have not only proved the cynics wrong, but has emerged as a media platform to be reckoned with”.

Cross section of Sierra Leoneans pose for a photo with the HOC after the ceremony.