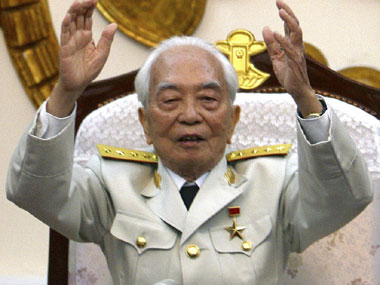 Sierra Leone’s Embassy in the People’s Republic of China, with accreditation to several other countries in south-east Asia, including Vietnam, has on Monday 14th October 2013 joined other Embassies in China, in mourning the death of General Vo Nguyen Giap, former Commander in Chief of the Vietnam People’s Army.

The late General was also Secretary of the Central Military Commission, Standing Deputy Prime Minister and Minister of National Defence of the Socialist Republic of Vietnam in 1976. He died on Friday October 4th 2013. The late General played a crucial role in Vietnam’s struggle for independence.

Signing a Book of Condolence on Monday 14th October at the Embassy of Vietnam in Beijing, Chargé de Affairs and Head of Chancery of the Embassy of Sierra Leone in the People’s Republic China, Paul A S Minah referred to the late General as a great hero in the history of the Socialist Republic of Vietnam.

Sierra Leone, Paul Minah went on,  has had strong bilateral relations with Vietnam and with the present moment of sorrow and grief, there was need for Sierra Leone to join the world in mourning the death of the late General.

Over the years, both countries have been enjoying strong and growing relations at the diplomatic and multilateral levels. In 2011, a 10-man Vietnamese delegation visited Sierra Leone for discussion and conclusions of arrangements for direct intervention in Sierra Leone’s rice, coffee and rubber production. The move was itself said to have been preceded by a will to set up a tripartite cooperation between the two countries and Egypt in agricultural development.

Also in  sustaining the South-South Cooperation Programme between Sierra Leone and the Socialist Republic of Viet Nam, and with financial support from the Food and Agriculture Organization of the United Nations (FAO),  a seven man delegation from Sierra Leone visited Vietnam from the 13th  to 19th of January, 2013 with an objectives of engaging  in technical discussion on proposed areas of support with clear agreement on specific deliverables and outcomes to be realized during the formulation and the implementation of the programme.

The team, which was led by the then Deputy Minister of Agriculture, Forestry and Food Security, Ali Badara Mansaray, also explored opportunities of collaboration in the development of Inland Valley Swamps, and implementation of aquaculture projects in Sierra Leone as well as discussed in detail the planned assessment formulation mission and identified the team of experts that will be fielded to Sierra Leone.

In general the ties between the two countries have strongly been reflected in both countries’ agriculture sector, amongst others.