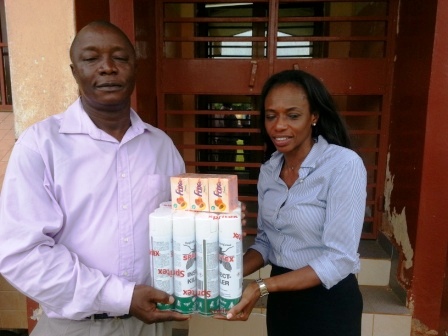 The presentation which was done at the Football Association’s ground in Kingtom on Thursday 10th October is in support of the National women’s U-20 side who are presently camped and in training ahead of the first leg African region qualifiers for the Women’ World Cup in Canada 2014. They will be up against their Nigerian counterparts on the weekend of the 25th, 26th and 27th October in Nigeria with the return leg two weeks later.

National women’s U-20 side practising

Speaking during the presentation, Sannoh said “This is to demonstrate that there is now lasting peace in the football family and for now we are supporting the president of the FA for the growth of Football in Sierra Leone.

We are going to support Madam Johansen and ensure that she succeeds and if she does, the accolade will be one for the Executive and the President.  This is a gesture is also to demonstrate that peace has returned to the entire constituent districts in the Eastern region.’’

Responding, Madam Johansen expressed her delight by the magnanimity shown by Sannoh saying “I am happy for this and it is indeed a sign to show that peace has been restored and the gesture from Sannoh is a genuine display. This has given me added impetus to work for the new football Family and to strengthen the relationship within the Family”

As an extended gesture of peace and Sanity, Madam Johasen has been invited to take the kick off as guest of honor at the finals of the Kono Town League later this month.