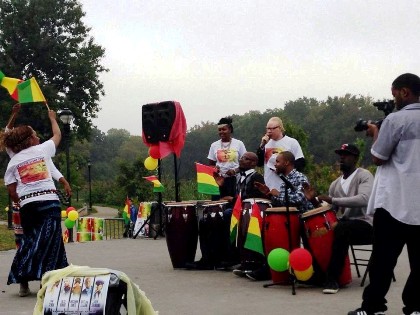 Since Wednesday, October 2, Guineans in New York have been celebrating their country’s 55th Independence anniversary.

Organizers say because it was their first efforts, they were not able to secure established artists from the homeland to perform but they   are working on that for next year.

“Guinean Day Festival was just about promoting our culture.  There is a lot of us here and I found that the Guinean people, we do not have many events that represent our culture as a whole, we have a couple of events that represents certain segments of our community,” said Cheick Traore, a Guinean who migrated to the USA in 1999 and a primary organizer of Sunday’s event.

Traore said the idea behind Guinean Festival Day is to bring Guinean people together to represent the whole culture including all the ethnicities and everything about Guinea While presenting a program that not only unite the Guinean community but also create a platform for the artists of our country in New York and all over America.

Guinean Festival Day came a week after a contentious, legislative election held on September 28, which the opposition describes as marred, by widespread fraud and irregularities.

Delay of the full elections results has caused mounting tension in the country.    On Tuesday, Alpha Barrie, Special elections spokesman said 30 young opposition supporters were arrested for staging an illegal protest to criticize the disappearance of a ballot box in the capital Conakry’s administrative district where the president Alpha Conde’s office is located.

“The political situation in Guinea is better than it used to be unfortunately, it still has a long way to go. The president Alpha Conde is doing his best to fix the problems in Guinea but at the same time, the way he is going about it seems shady at times. Therefore, it creates a lack of trust for his country men and women in his government. I am the type of person that strongly believes that a government is for the people of a nation, not for the people who rule the nation,” Traore said in a statement.

Traore further explained his country Guinea is full of corruption, favoritism, theft and division. “Politicians are dividing the people for their own personal agendas.  Many people get into the government poor but mostly come out rich. The president himself who was known to be at the forefront of the opposition during the former Lansana Conte’s government and previously known to be humble and simple now days flies in a personal Jet to campaign around the country,” laments Traore.

Saturday’s poll delayed by nearly two years because of disputes over procedures was meant to serve as a final step toward democratic rule in Guinea, which held its first presidential election in 2010.

Official reports say at least 50 people have died in political violence and the climate of instability has deterred mining investment in Guinea, the world’s largest bauxite exporter.