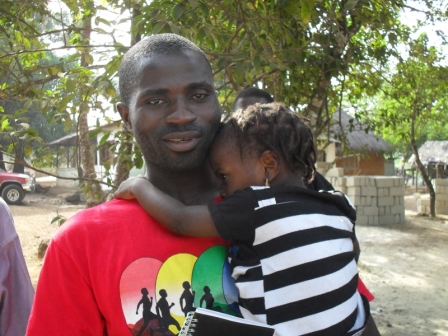 Reports reaching this paper state that the people of Bureh Town are clamouring for a fresh Headman election since they say they do want Mr. Michael Tucker who they say was declared as the winner by the National Election Commission (NEC) thereby depriving the incumbent, Pastor Gibrilla Bendu (in photo with his daughter), who they maintain is their choice for Headman.

The reports further state that the NEC Returning Officer who conducted the election, Mr. Paul Demba, was allegedly bribed to disenfranchise Pastor Gibrilla Bendu for a matter between him and Alhaji Umarr Salam, a matter that that has reportedly been committed to the High Court in Freetown.

The reports further explain that the matter which was heard by Magistrate Emmanuella Harding of Court No. 6 stated that Alhaji Umarr Salam gave Pastor Gibrilla Bendu two power saws for him to work with.

The reports further state that the complainant said in open Court that he recalled testifying that he gave Pastor Gibrilla Bendu two power saws for the defendant to take to Bureh Town for safe keeping.

In an interview with the Youth Leader of Bureh Town, Mr. Samuel Thompson, he said they that they were not against Mr. Michael Tucker but that the Local Government Act of 2002 was silent about Village Headmen.

He explained that the election was not properly conducted and called on the NEC to re-conduct the election so that the people will choose the candidate they want.

The Harbour Master, Mr. Abu Douglas, said Mr. Gibrilla Bendu is not a criminal as he did not steal anything from anybody but that the power saw was given to him by his Aunt to help him take care of his family.

As far as Mrs. Mariatu Sesay is concerned, free and fair election is the only way to solve the Bureh Town problem. She stated that there was much improvement under the incumbent Headman, Gibrilla Bendu, who she said was very fatherly, transparent and accountable to them.