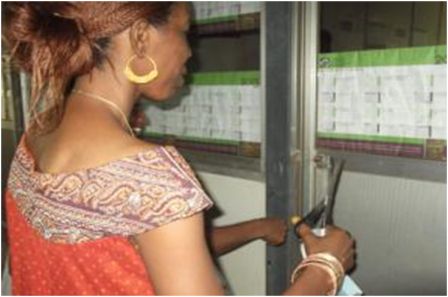 The Society for Knowledge Management Sierra Leone (SKM-SL) has opened what its Director, Mr. Umaru Bangura referred to as a knowledge bank at the Magburaka District Council with funding from the Open Society Initiative for West Africa (OSIWA).  (Photo: Madam Nancy Sesay, OSIWA representative, launching the knowledge bank)

He revealed that the equipment they purchased for this purpose was worth $15,000.  This, he said, was aimed at promoting knowledge sharing in that part of the country just like the one that has been launched in Freetown.

He further explained that the project is gearing towards empowering civil society and community based organizations with information sharing and knowledge management. He noted that the total project cost is $50,000 with all the funding coming from OSIWA.

He expressed satisfaction over what he referred to as the good number of community based organisations they have trained in the northern region following the launching of the knowledge bank.

In his remarks, the Inspector of Schools Tonkolili District, Mr. Abdul D. Bangura, thanked OSIWA for providing the funds for the project which he described as timely. He also expressed his appreciation for SKM-SL for choosing their district. He encouraged members of the community based organisations to take advantage of the opportunity that has been provided for them.

In his statements, the representative of the community based organisations, said in the absence of the freedom of access to information, the knowledge bank will serve as a reliable source of information and promised their commitment to the development of the bank.

In he remarks, the keynote speaker, Mr. Sheriff Mamoud  Ismail, Communications Specialist of the World Bank, thanked OSIWA and SKM-SL for what he described as the timeliness of their intervention, particularly when reports show that Tonkolili district is the poorest in the country. He said with the knowledge bank, the people should be able to transform their lives through information and knowledge sharing. Mr. Ismail said knowledge is power and the people need it to better their status in society. He encouraged the people to share what they know with others and regard the knowledge bank as their property by supporting and protecting it.

In his comments, the Tonkolili District Council Chairman, Mr. Alusine Kamathor Sesay, reaffirmed his Council’s support to SKM-SL and promised to do more for the centre. He said providing the space for the knowledge bank by his administration is not going to be end of their support to the project. He encouraged the people to jump at the opportunity which has presented itself.

Declaring the knowledge bank launched, OSIWA representative, Madam Nancy Sesay, said that they were pleased with the implementation process of the project. She encouraged community based organisations to familiarise themselves with the issues for effective and efficient outcome of heir work. She said OSIWA was supporting a lot of projects in the country, pointing out that this was the first project OSIWA was funding in the Tonkolili district. She encouraged the people to use the centre wisely and to share their information with each other.

Independent candidate left in the...

In Sierra Leone, Mohamed Kallon an... 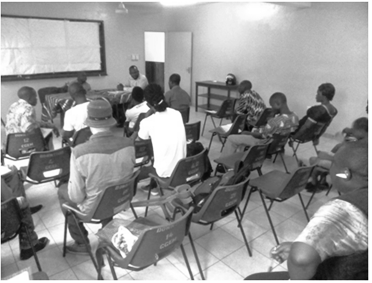