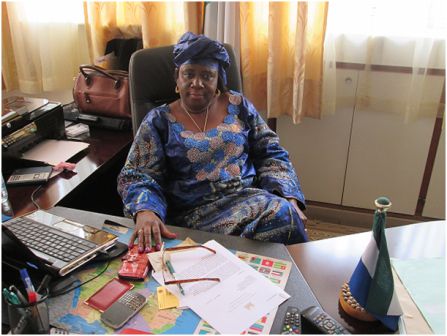 An initiative to restart commercial sea transportation between Freetown and Dakar has been put forward by Her Excellency the Sierra Leone Ambassador to Senegal Khadijatu Bassir to the Senegalese Minister of Fisheries and Maritime Affairs Hon. Pape Diouf.

Speaking to the Minister on July 31st together with other senior officials of the Ministry at his down town office in Dakar, Ambassador Bassir said her visit was geared to further strengthen the fraternal ties between the two countries as both nations share much in common. “I am also here to propose and to deeply discuss the vital issue of the reintroduction of the commercial operation of a sea vessel between Sierra Leone and Senegal” she said.

Further addressing the Minister, Ambassador Bassir said as members of ECOWAS and the Regional  Fisheries Commission, authorities of both sisterly countries should think seriously about such a transportation along our coastal lines and the region as a whole that will no doubt further increase and strengthen the free flow of goods, services and regional integration. She reminded the Minister that there was a vessel (MV MABALA) in the past plying between the two capitals that did carry many goods and expanded trading. Ambassador Khadijatu Bassir further informed that nationals of Senegal, Sierra Leone, Gambia, Guinea, Guinea Bissau and Liberia, do travel the region through not admirable roads network to buy goods due to the increasing cost of air fares. “The barrier between Anglophone and Francophone has long been broken, therefore,  the reintroduction of such a venture Mr. Minister would doubtless bring in many legal goods, free flow of people, expand trade, better our peoples financially, provide services to the region and beyond and further encourage African integration” she noted.

Responding, Minister Pape Diouf thanked Ambassador Bassir for what he described as ‘a bright regional initiative’ that would benefit the two countries and even beyond. He observed that the issue of a low cost and effective transportation to better and service our peoples in Africa is indeed a big problem which requires urgent attention, noting that it is high time authorities in Africa put their heads together to solve it for the advancement of the continent.

He observed that there are lots of areas of cooperation to look into within our region and that Maritime transportation is just one of them, observing that it is cheap and carries lots of goods. He disclosed that a similar sea transport agreement has been signed and implemented between the governments of Morocco and Senegal and that if our region is added it would also see the re introduction of a ‘BATA SYSTEM’ in goods and other related services

According to the Maritime Affairs Minister the government of Senegal has ordered the  importation of three brand new vessels and no doubt on arrival, one of them would be put into operation to service the region. He said that he is willing and ready to travel to Freetown for the immediately signing of a memorandum of understanding between the governments of Sierra Leone and Senegal.

‘Madam Ambassador, let me say without any reservation that at the successful implementation of this your brilliant initiative, it will be a feather to your cap and credit to your diplomatic career” Minister Diouf said.

The Ambassador was accompanied by the First Secretary Samuel Kaikai and my good self.

On the Signing of the MOU between...