Is EBK a visionary, transformer, patriotic eader, progressive, an asset and a legacy for Sierra Leone? 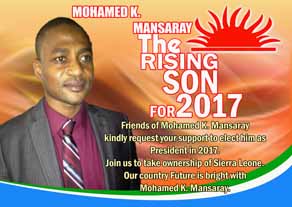 Is EBK a visionary, transformer, patriotic eader, progressive, an asset and a legacy for Sierra Leone?

In my opinion and in reality, the answer is a BIG Fat YES! With all due respect, I individually look at things in a spectrum and arrive with my views not too suiting to some readers personally or politically. In reality, EBK has brought hope to Sierra Leone not only in the minds of the people but the sight of development and progress around the country is in sight to see and there is proof to show that he means well for the nation and people of Sierra Leone.

Looking at the Prosperity Agenda 2012 demonstrates his vision for the future of our beloved nation. He talked about roads. The whole country is experiencing infrastructure changes in the capital through the provinces and there is proof to show because it’s in sight to see.  He mentioned electricity.  He has done his best to enforce the completion of Bumbuna Hydro Power.  With adequate resources and skills , this project will meet his goals to electrify Sierra Leone before the end of his last term as leader of our nation. In the interest of the people, EBK went all out to make his people happy, he sought assistance from his allies India and it paid off donating thousands of solar street light panels to Sierra Leone. EBK, this is the best thing that ever happen for the people of Sierra Leone through your generous Leadership.

His vision for the business village and new international airport on the outskirts the capital Freetown has kicked off as planned and the proof is there to show because its in sight.  His railroad project as means of mass transportation round the country prospect completed and deal is done. EBK is bringing back the good old days when trains use to be a source to move goods by businessmen and farmers to and from cities building commerce sector and a stronger economy. As for iron ore – we will be dug out of poverty before the end of his 2nd term as reported in Economy World Report to be fastest growing economy in the world and as projected, poverty will be behind us because of the relentless efforts of President Dr. EBK.

His initiatives in Agriculture have encouraged foreign investors to grace our fertile lands in plantations and general farming to help maximize food production and food security throughout Sierra Leone. As his vision to make higher education a must achievement for Sierra Leoneans, he has projected the two main Universities Fourah Bay  college and Njala University needing close to $50M to update and restructure to meet higher education standards of the 20th and 21st century.

In his view, the Lungi Bridge is in sight and with good governance and vision for Sierra Leone, this will be his crown jewel and everlasting legacy in his name and for love of country.

I have love and great respect for our President as a good man with principles and charisma fit for a Leader, but I have problems with his flock of egoist and power mongers who are in play for their own agendas and interest. With restructuring and pinning down on culprits of corruption must be dealt with out and within his circle. As for Transparency, lessons are learnt from simple mistakes and the people of Sierra Leone look to you to keep the name of our nation clear.

One area that no one has a clue is who is next to continue your great work and vision? I see a risingstar on the horizon, young , brilliant, charismatic, visionary , youthful, and a strong APC laureate with lots of followers and supporters to meet 2018.

I recommend to you the rising star of the APC, Mr. Mohamed K Mansaray for President 2018.