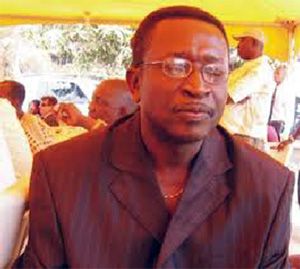 Today, Sierra Leone is witnessing the proverbial “history repeating itself,” albeit on a positive note. Records have it that the first leader of this noble party, the SLPP, was a Paramount Chief, a Temne who hailed from the Kambia District, Northern Province in the person of the late PC Bai Farma Tass III. As God will have it, our consensus candidate, Chief Somanoh Karpen III, shares identical traits and status. He is a Chief, a Temne and hails from Mambolo, Kambia District, Northern Province. Suffice to say that the coincidences extrapolate further, in that both of them abdicated their respective thrones due to political undue pressure because of their love for the SLPP.

The relevance of these historical coincidences has direct bearing on the theme of this press conference namely, “UNITY AND STABILITY.” In the germinal years of the SLPP, late PC Bai Farma Tass III served as the fulcrum around which the party will coalesce to attain the elusive UNITY AND STABLITY to achieve defined objectives of the party.

Mr. Chairman, the reason for my stepping down for Chief Somanoh Karpen III has no bearing on him being a Chief, a Temne and a Northerner. Far from it!  For experience has shown me that a decent and mature party like the SLPP should not even contemplate on such retrogressive and dangerous criteria to serve as the critical pathway to ascend to leadership. My reason for stepping down is quite elementary- as the legendary detective Sherlock Holmes would have said. The act of voluntarily stepping down was driven by my genuine love for the SLPP above self and the burning desire for the party not to fall once more into the hands of political merchants with concomitant destructive ramifications.

Fortunately, our consensus candidate, Chief Somanoh Karpen III, without any reasonable doubt is an academic par excellence, a traditionalist and above all, possesses the relevant working experience for such a complex job which is much harder than Physics or commercial business, commonly called POLITICS.

Furthermore, I am not particularly interested in political titles but to be given the opportunity to avail my experience and potential to the party to once more regain power. In that regard, I wish at this stage to announce my candidacy as agreed by all, for the position of the NATIONAL DEPUTY CHAIRMAN/LEADER. My Manifesto will encompass amongst others, the theme of this press conference, (UNITY AND STABILITY), decent politics, abhorrence of violence of any kind, respect for all and sundry and recognition of everyone’s contribution within the overall ambit of collective leadership.

Finally, I am appealing to the other candidates for the Chairmanship of this party to come over for us to rally behind Chief Somanoh Karpen III as the undisputed consensus candidate. There is still time for such wonderful act. After all we are all in the same party, striving for the same cause- i.e., retrieve political power.

I THANK YOU ALL FOR LISTENING

MAY GOD BLESS US ALL