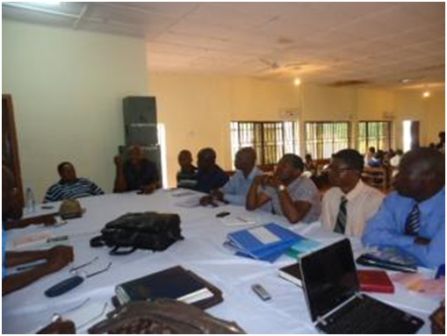 Questioning officials from the St Paul’s Secondary School, the committee found out that the school has been withdrawing monies paid into the school’s bank account as tuition fees by students since monies are not received in the school but only through the bank.

The committee however noted that from the bank statements presented to the MPs,  the school’s account was in deficit  of  Le10 million but the school was still withdrawing money from the bank.

The committee viewed it as strange and baffling.  The school’s bursar was asked if the school has an over draft arrangement with the bank but replied in the negative.

The committee also observed that both the junior and senior secondary schools have the same account.

The Pujehun District Council Chairman,  Sadik Sillah explained that the school has a serious problem and that since the school is under the purview of council,he decided to supervise, admitting that indeed the school has only one account and was being used by only one principal for both junior and senior schools. He said as the school is owned by the Catholic Mission, the problem is who should be in Board of Governors.

The Chairman of the Committee, Hon Hassan Sheriff resolved that the committee suspends its hearing until the school presents very recent bank statement from the banks in Bo or failing produce the money misused.

The Holy Rosary Secondary school, also a Catholic, also had a debit of one million and a deficit of 10 million Leones.

They told the committee that the school has a board but the committee asked the principal to produce the appointment letters of each board member.

The acting bursar, Musu Sesay could not give account of monies collected as school fees per term.

The committee noted that the bank, Rokel Commercial Bank, was lending the school money even though there was nothing in the school’s bank account.

The school authorities were asked to report in Bo with all necessary documents.

ACC to investigate use of Girl-Chi...