ACC to investigate use of Girl-Child Grant Bonthe District 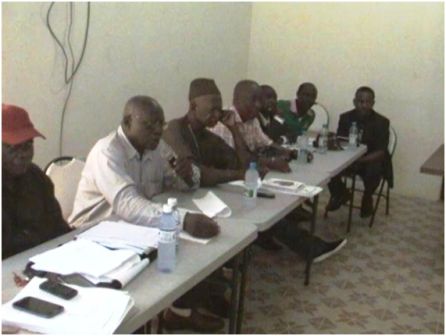 ACC to investigate use of Girl-Child Grant Bonthe District

Members of the Parliamentary Education Committee on July 18 2013 suggested for the Anti-Corruption Commission to investigate the use of the girl-child grant in Pujehun because adequate answers were not given regarding the use of such funds.  (Photo: Some members of the education committee at work)

The Committee requested from education stakeholders across the district at a meeting it held with them in the regional capital of Bo regarding the effective implementation of the decisions taken by Government through the White Paper, based on the Prof. Gbamanja’s Commission of Inquiry 2008.

Chairman of the Committee, Hon Sulaiman Sisay, said several efforts both in human and material resources have been made both by past and present governments towards the improvement of education.

“In spite of all these, the sector still faces challenges. Therefore as the people’s representatives, we want to ensure, among other things that our children are provided with accessible, affordable, safe and above all, quality education that could match international standards. In doing this, we would also probe into the effective use of public funds allocated at the local level through devolved functions, by the appropriate authorities.”

In response, Sulaiman A Sengeh, one of the acting principals of the junior secondary schools who spoke on behalf of the others, said they are new principals and are not presently signatories of these accounts so as such they cannot give the requested details.

He however acknowledged receipt of the child girl grants presently being lodged into their respective school accounts.

Joseph MB Sesay, Deputy Director of Education, who took up appointment on 26 April this year, said Bonthe has 11 chiefdoms, most of which are difficult to access.

The senior secondary has 66 qualified male teachers and 6 qualified female – but 15 of them are not on payroll.

The Deputy Director said all the schools are operational but with difficulties which should be looked into very quickly.

As for the tertiary institutions, there are three of them in the district, one of which is not yet approved.

“Regarding the girl child support – these monies are paid directly to the schools’ accounts without their sending details to the education secretariat; we find it very challenging to account on their behalf, as such we cannot comment because as a policy we should be given the list; instead the headteachers take it directly to the ministry.

“The fast track education is a worrisome issue because for government to spend a lot of money and these schools are not approved will not help the situation. There are 4 EFTA/EFTI schools, 3 Sababu schools, and 10 Nacsa schools that have not been approved. We have made remainders and recommendations but they are yet to be approved.”

“Regarding the effective use of the girl-child education grant, parents have been asked to pay and would be refunded when government disburses the funds. However, we are not informed when these monies are sent to the different schools, so we don’t know much about it, besides a copy is not sent to us as a district office to know whether school X has received this amount or that. As a principle, we called the principals to a sensitization meeting to tell them that these monies are meant to be refunded to the parents and that we need a copy of these documents because the monies goes directly into their account.

“And whether the district council is having an education officer stationed at the council, no, this is not presently happening; the council is not being provided with office space.”

He said the district is indeed benefitting from the grant-in-aid – presently it has 50 quotas of grant-in-aids; and there’s a panel that considers the granting of these.

Regarding his work in the education office in Bonthe, MB Sesay said there 7 inspectors, 5 supervisors, working with him who assit in the administration, go to schools to see that work is done.

He praised Unicef who are helping greatly in the retention of  girls in schools – it has initiated, among other things, 10 mothers clubs’ and gives Le500,000 to each of them in helping them about how they should go about in their education.

“World Vision Sierra Leone is also helping, with messages and counseling, among other things.”

He said teenage pregnancy is a serious problem in the district.

“The challenges to which we want help are for teachers to be approved; and to ensure that they put pressure in the approval of schools. Grant allocation to the district is also very, very small – Le57million – it should be increased, considering the difficulties in accessing the whole of Bonthe.”

Julius Bangalie, Chairman of the Education Committee at the Bonthe District Council, said the former deputy director was not working with him, except this new one.

He admitted of having no knowledge about the activities regard funds, uniforms, subsidies, etc. as their functions were not really communicated to them (he has been 7 months into the job as chairman of the committee).

“If monies were coming through the council, we would be able to account for them but since these monies are coming into the schools’ accounts, we don’t know. I have also told them that an education officer should be stationed at the council but this has not happened yet.”

In response, the Committee said chairman does not know anything about school administration.

Hon Dr. Roland Kargbo, Deputy Chairman of the Committee, said, “We want to see the relevant documents about how these monies were utilized and nothing has been produced to that effect. Look, we want to believe there is no working relationship between the council and the education committee. Government is providing a lot of money and we are not seeing the fruits of that! Now, if you allow the ACC to enter into your district, there is going to be disaster for you.

“And the education chairman is really not up to the task because he cannot answer the relevant questions; he should be replaced or should be sent on training for him to live up to the task,” he said.