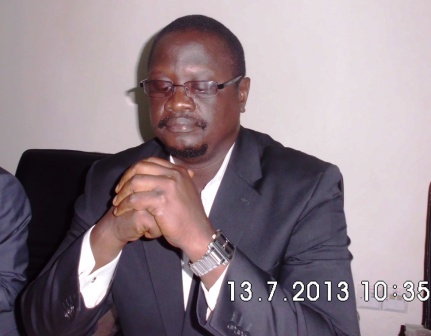 A team from the Anti Corruption Commission (ACC) comprising of the Director of Public Education and Outreach Department Mr. Sholay Davies (in photo), Legal Officer Adrian Samuels have been joined by the Ag. Regional Manager East, District Coordinator Kenema and other staff from the Kenema Office to entreat staff and administrators of the International Fund for Agricultural Development (IFAD) project on corruption related issues and muster their support to the national fight against graft.

The meeting which took place in the Headquarters of the National IFAD Project Coordinating Unit (Technical Assistance Agency TAA) at No 169 Blama Road in Kenema on Saturday the 13th July 2013, attracted all community banks and financial services agencies managers and staff in the East, board chairpersons of the financial institutions in the East, management staff, consultants and the national project coordinator. The meeting was initiated by the management of the IFAD project coordinating unit aimed at sensitizing staff on corruption issues, guiding the institution’s financial operations and opening their doors to the ACC for investigations and prosecution in an event of any corrupt practices taking place.

The Banking Consultant Mr. Edmond Kangaju in his welcome address posited that the partnership and coalition building meeting with the ACC would have come at no better time than now, when the nation is trying to come to terms with the latest financial scandals heating banks and government revenue authorities. He encouraged staff present to be committed to their work, national development efforts and stay on the side of the law as the institution will not cover any financial scams.

The Rural Finance Officer of the IFAD project Mr. Sesay expressed fulfillment in the meeting as he considers ACC as a partner institution that can help strengthen the operations of the IFAD project. He gave a brief overview of the IFAD project as one aimed at providing equal access to financial resources to the rural people especially the disadvantaged. He stated that IFAD funds are augmented by the Government of Sierra Leone and as of date, the project has built and made fully operational 13 Community Banks and 51 Financial Services Agencies across the nation. He stated that like the other financial institutions, they are not immune from the potential threats posed by fraud and corruption and hence as a precaution seek to have the ACC periodically sensitize and caution staff, regularizing their systems and processes and investigating all alleged corruption cases in the operations of the project.

The National Programme Coordinator MAFFS/IFAD programmes Mr. Mohamed Tejan-Kella in his statement did thank the ACC for the move. He stated that the IFAD programme was set to succeed due to the record scored over the years which has seen the programme receive additional funding from IFAD for the second phase. He stated that despite the good work over the years, it was apparent that the threat posed by corruption and fraud cannot be left unattended and hence the move to partner with the ACC  to help proffer precautionary measures and where possible investigate corruption allegations. He admonished all staff and board members to stay away from corruption and support the projects to continue succeeding.

Director Sholay Davies who was Chairman of the occasion, stated that the meeting was an inspiration to him as public institutions do not normally invite the ACC for partnership. He mentioned the latest financial scandal heating the country was a wakeup call for all to be involved in fighting graft as a national menace. He spoke on the recent Transparency International’s barometer rating of countries in the fight against corruption, which indicated that out of 1028 respondents contacted  in Sierra Leone 84% indicated having paid bribe in the last six months as a measurement of Sierra Leoneans inability to resist, reject and report corruption. He stated that the partnership between ACC and IFAD will increase awareness on corruption among staff, teach them the consequences of graft if one is involved and how to join the national fight against graft. He stated weak internal control mechanism, greed and selfishness, weak and irregular monitoring and evaluation and failure by management to respond adequately to internal audit queries as some of the causes of corruption in MDAs. He indicated the ACC’s willingness to always support institutions in the fight against graft adding that no stone will be left unraveled in the national fight against graft as he again called on national support in the fight.

Participants come together for a group photo

A Legal Officer of the ACC Adrian Samuels did take his audience through some of corrupt practices with apt examples as contained in Part IV of the Anti Corruption Act 2008 that applies to the work of the IFAD staff and their corresponding penalties. He gave a brief background of the commission and stated that the fight  against graft is a national one which the ACC is only leading and hence strongly looks up to the unwavering support of all if success is to be assured. Indicating the various way of reporting graft to the ACC and the level of confidentiality and support the commission gives to informants, Mr. Samuels encouraged his audience to stay away from graft and report corruption to the ACC irrespective of who is involved.

The meeting ended with a strong show of commitment by all present to the national fight against graft as questions were asked and responded to by the ACC team.