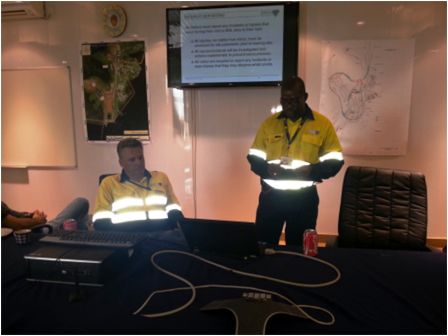 The company’s General Manager Ports and Marine, Raymond Chirwa, made the disclosure during a site visit to their Pepel operations by delegates of this year’s Indaba held at the Miatta Conference Hall in Freetown.

The record achievement brought the London listed company, and one of the continent’s biggest investments, second to South Africa’s Kumba Resources, the largest on the continent.

He told the visitors that AML would strive for a low cost port, identify and implement cost saving measures and minimise major plant failures through their robust engineering and maintenance systems.

In a short video broadcast to the Indaba gala dinner at the Bank Complex in Freetown,

Chief Operating Officer, Stephan Weber, said they were very proud to be able to participate and to be a sponsor of the Sierra Leone mining, energy oil and gas and infrastructure Indaba 2013.

“The Tonkilili mine is an integrated project with over 75 years of mine life. It comprised of mine, rail and port and it is strategically located for export into the European and Asian markets,” he said.

He recalled that just three years after discovery of the ore body, fifteen months after receiving licenses and ten months from funding the first iron was shipped out of the country in November 2011.

Stephan added: “From there on we have been ramping our production and only a couple of weeks ago AML announced to the market that we’ve achieved 20mtpa of run rate between the 18 of May and 16 of June. This was a key milestone for our mine, rail and port operations.”

Currently the company is developing a study to expand its operations for up to 35mtpa and it would encompass new mining equipment, new processing plants, duplication of the rail, additional car dumper and ship loader at the Pepel ports.

One of the organisers from South Africa, Tinashe Tafira, said the project was massive and expressed satisfaction at the support provided by AML, a key partner that made a major input in terms of cash and guide.

The SL Indaba 2013 was held between July 2 and 4 and featured an outstanding programme that incorporated an investor exchange and examined issues affecting the mining, energy, oil and gas and infrastructure sectors in Sierra Leone.

Shifting the trajectory from Chang...