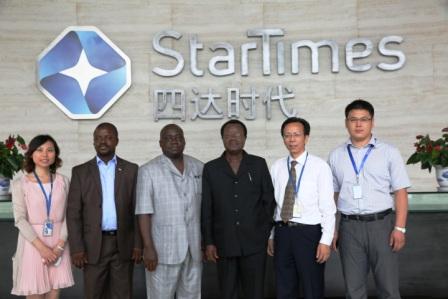 Sierra Leone’s envoy to the People’s Republic of China, His Excellency Victor Bockarie Foh has spoken highly of how the government of President Ernest Bai Koroma gives premium to the aspect of information and communication, saying, “Communication is ranked high on President Koroma’s agenda”

He made these remarks on Tuesday, 9th July 2013 during a visit to the Headquarters of Star (StarTimes) Communication Network Technology, at Crossroads of Jinghai, Beijing Economic Technology Development Area, Beijing. His visit came at the invitation of the Vice President of StarTimes Group, Charles Liu. According to Ambassador Foh, Sierra Leone is in a changing world and with china being the future of the world, there is the need for “us to deepen our link with them.” He reiterated, that China and Sierra Leone have been together for a long while “and we will further forge such bilateral relations…”

Speaking further, Ambassador Foh said he had read about StarTimes and their links with many other African countries, especially in relation to the future of digital television in Africa. “I learnt there had been an ongoing discussion with my predecessor and the Ministry of Information and Communications. I will be happy to continue in pursuing it so as to fast track arrangement for you (StarTimes) to actualize your dreams in terms of operating in Sierra Leone as it is the case in other African countries”

Ambassador Foh said, he has heard about the concessional loans and grants for the project in Sierra Leone and how the group would ensure these issues are worked out but assured, that given their experience in other African countries, StarTimes should be able to operate in Sierra Leone effectively. He therefore encouraged them to work with the Embassy so as track the process and meet the deadline set by the International Telecommunication Union (ITU) for the realization of digitalization of television broadcasting by member states, Sierra Leone being one.

The advantages of digital television, Ambassador Foh said cannot be overemphasized. As such, Sierra Leone needs to catch up with current trends in international development, especially in relation to digital television. “A country that refuses to move with the wind of change will be putting its people into risk in terms of development”, he said.

In his remarks, Charles Liu, Vice President, StarTimes Group informed Ambassador Foh that his Group has been a major player in China, serving as the most influential system integrator, technology provider and network operator in the country’s broadcasting and television industry. With an African  vision of  enabling every household to have access to digital TV, afford digital TV watch good digital TV, Charles Liu also  informed Ambassador Foh that they have constricted and now operating digital TV businesses in 9  countries in the continent.

On status of the project in Sierra Leone, Liu said, they have approached the Government through the Ministry of Information and Communication to work on plans for the digitalization of television broadcasting in the country, ahead of the 2015 deadline given by ITU. A project expected to run into millions of dollars, Liu said they have signed a joint venture with SLBC and have agreed to invest in building Digital Terrestrial Television networks in major cities in the country. StarTimes, he said will facilitate the process of  the Sierra Leone government to obtain a Non-Reimbursable Aid and applying  for a concessional loan from the Chinese government for the digitalization of SLBC.

SLBC, on its part will be expected to provide the infrastructure for the use of the transmission network, as StarTimes will transmit the two channels of SLBC for free in the digital transmission network to be constructed by StarTimes. The project, when fully realized will work towards the digitalization of program production and the play-out and control system of SLBC, purchasing of Digital Terrestrial Television, Direct-To-Home transmission network for rural areas, amongst other proposals.

According to Liu, they “can purchase decoders and give to every household with TV set for free of charge and for the rural areas, since there are constraints of electricity we propose to set up TV centers with solar powers. All of these will cost millions of dollars. What we now need is for the government to sign a commercial contract with StarTimes and submit application of concessional loan to Chinese government.”

StarTimes was established in 1988 with a culture of innovation, integrity, diligence and devotion with employee strength of over 3000 .It has a development strategy of adopting DTV technology, establish a powerful, open and secure multi-frequency and multi-channel digital wireless TV transmission platform.

Ambassador Foh was accompanied by the Head of Chancery Paul Minah during his visit to the Headquarters of StarTimes.

Meanwhile, in another development, Ambassador Victor Foh on Tuesday 9th July joined several of his colleague African Ambassadors in welcoming President Goodluck Jonathan of Nigeria, who is on a state visit. He arrived few days after the departure of Sierra Leone’s President Ernest Koroma who was also in China on an official visit.

‘I sold the vehicle to Sylvia Blyd...