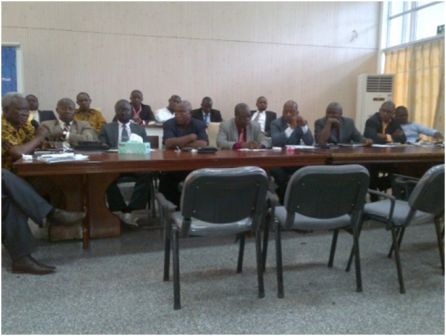 During the session, the Chairman of the committee noted that Airtel was invited regarding the continuous complaints from members of the public over the company’s poor quality service delivery.

During the session, Airtel was asked to furnish the committee with the company’s certificate of registration, evidence of payment of NASSIT and NRA as required by a recent letter sent to the company by NATCOM.

Hon. Binneh told Airtel that they were in parliament to serve the public which voted for them, and that they were working assiduously as parliamentarians to ensure that the agenda for prosperity becomes a success.

Hon. Hassan A. Sesay noted that Airtel has the biggest customer base among other mobile phone companies in the country, but queried the company for providing what he referred to as poor quality service to its customers.

Hon. Sesay wanted to know if the company has paid the $450,000 (four hundred and fifty thousand dollar) fine that the regulatory body, NATCOM had earlier imposed on it.

“We read in the papers up to last week that NATCOM has issued a twenty days notice to you regarding the money,” he said.

The MP praised the company for doing a lot of promotions around the country to expand their cliental base which he said was very good, but noted that Airtel is still living with a fine imposed on the company since last year.

Committee members demanded from the Airtel to upgrade its network system as many customers are suffering from their poor network services.

Responding, Airtel officials promised as a mobile company to do more to satisfy their customers.

Other companies that were probed during that sitting were Africel, Sierratel and Commium in which Africell was praised by the committee for keeping up to standard and urged them to do more to improve on their network.